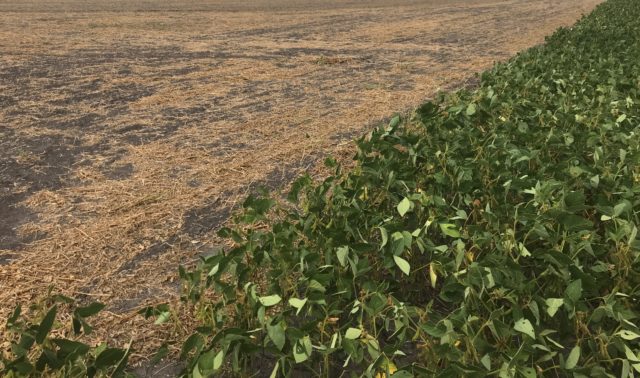 Weeds are opportunists. They seize the moment and grow in spaces and places where they are undesirable. Ehrenfried Pfeiffer wrote in the book Weeds and What They Tell Us to “Remember: wherever weeds grow, they have something to tell us. Weeds are indicators of our failure.”

That seems a little extreme, a weed will grow between the cracks in a sidewalk, not because of anyone failing but because a weed seed found an opportunity and grew.

A new weed may become a dominating problem in a field for several reasons. Perhaps it’s an indication of soil conditions, a reflection of the crop rotation or even herbicide resistance. If a weed patch is due to herbicide resistance, we frequently recommend patch management to avoid contaminating the field or the entire farm. But the idea of focusing efforts for weed control to patches makes sense in a number of situations. By preventing the spread of newly introduced or highly problematic weeds and reducing seed set, we can minimize future costs associated with weed control and increase land productivity.

Let’s set aside the issue of herbicide-resistant patches, where chemical controls are challenging and patch management is sometimes the only option and look at other weed patch issues first. The quantity and type of weeds in a patch may indicate soil properties, including issues such as salinity, or variation in soil texture as influenced by erosion and soil moisture. Other factors that can influence weed populations, and that we can adjust, are crop rotation and tillage. By assessing the cropping pattern and the consistent weed issues in a patch, and knowing the biology of the weeds, there is an opportunity to adjust the system to reduce the problem.

Pardon the pun, but this is about getting to the root of the issue, the above-ground portion of the weed is not so important as the details of what is happening below the soil surface. Some weeds are considered indicator weeds. Obvious examples are salt-tolerant weeds like foxtail barley and kochia or weeds that thrive in compacted soils such as pineapple weed and broadleaf plantain. While tillage may be an option for compaction, another option that could address these scenarios would be crop choice.

Field horsetail seems to be becoming an increasing problem in reduced-tillage cropping. This weed tends to favour poorly drained, low pH soils, so improving drainage or growing crops that tend to have a higher water use requirement may be much more effective than the limited number of herbicides that are registered for top growth control only. Other options might include timely tillage (in that problem area only so that it is not spread further) or some would suggest applying lime in that area to adjust the pH slightly and favour the crop rather than the weed.

Weeds that have a biology similar to the crop rotation will thrive when given the opportunity. It was in the 1990s that Agriculture and Agri-Food Canada research scientist Bob Blackshaw studied downy brome control in winter wheat, as the weed was causing 30 to -40 per cent yield reduction in that crop. The ultimate recommendation was for three to four years between winter wheat crops, and maintaining an oilseed or pulse crop in the rotation to help keep downy brome under control. Studies showed that downy brome seed remained viable for three or four years, so crop rotation allowed for seedbank reduction otherwise with a similar biology to winter wheat, downy brome was a significant obstacle to winter wheat production. A further recommendation was to control downy brome in adjacent areas, along field borders and fence lines to prevent it from spreading into fields (more patch management).

The same principle rings true for many weeds. Wild oats are a challenge to control in early seeded crops such as peas and wheat but not typically a problem in corn and soybean rotations. Wild oat prefers cool moist conditions, causing the majority of emergence to occur in the spring, which means tillage and later seeding dates will effectively manage a good portion of the wild oat population. Waterhemp prefers the open rows and sunlight provided by corn and soybean, so then early seeded, narrow row crops can help to address the problem. But many times, changing the crop rotation would not be necessary if the weed patches were managed before the problem was widespread in the field.

By managing the patch separately from the rest of the field, the impact of the weed is minimized, productivity of the field is optimized and long-term herbicide use is reduced. Technology available today makes the process so much easier. The first step is to document the location of the patches by marking them—dropping a pin—on a map while field scouting or flying a drone or accessing satellite imagery of a field to pinpoint the problem areas. The weed management choice may be as low-tech as going out to pull a few weeds or mowing off, silaging or grazing the weed to prevent seed set. Higher tech options include sprayers with weed sensors to apply herbicides only when weeds are detected and inter-row camera guided cultivators that can be used in narrow-row spacing and can be equipped with sectional shank control to avoid cultivating any rows.

The real opportunity for patch management is when there are isolated islands of a problem weed. I’d compare it to picking rocks. Both of these activities are proactive approaches to prevent future problems.