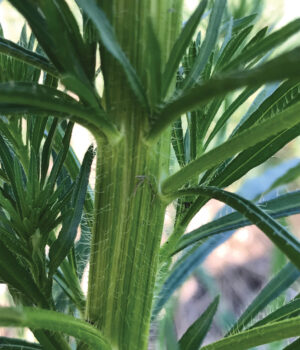 At the most recent Canadian Weed Science Society meetings hosted virtually in Quebec, Clarence Swanton from the University of Guelph summarized from weed surveys in Western Canada that the top three weeds in 1973 were still the top ranked weeds in 2017. Those weeds are green foxtail, wild buckwheat and wild oats. Swanton acknowledged the amazing ability of these weeds to adapt and adjust, as the agriculture industry has been working diligently to control them for more than 40 years and have not been able to gain the upper hand. So, why does it seem that there is so much emphasis on weed identification and scouting when the weed spectrum apparently hasn’t changed?

The “Why” of Weed Identification

The easy answer is dollars and cents. A two-year study at North Carolina State University estimated economic losses at more than $200 per acre when the “optimal” herbicide treatment was not used. The study looked at four different scouting methods from “windshield scouting” at the edge of the field to actual weed counts at six strategic field locations. This research found that there is more risk involved when herbicide decisions are based on less time-intensive scouting methods, but also showed that the value of more intensive scouting methods depended upon the weed spectrum present. The crop–weed dynamic is important, as is the identification of the weeds so that the control method is effective.

Taking the top-ranked green foxtail as an example, it emerges later in the season, is relatively non-competitive in most cropping scenarios and is typically not the key weed for spraying considerations. A highly competitive weed either due to early emergence, rapid growth or the ability to utilize resources more efficiently, would have a more significant impact on yield and should be proactively managed. So, while most would agree with Swanton that the weed population in a field does not vary dramatically, each year there are a few weeds that emerge as new concerns. Sometimes these weeds are short-term shifts related to weather conditions or changes in cropping patterns (annual weeds are more adapted to annual cropping systems as an example). Other shifts are likely to be longer term, such as changes in climate (heat-loving species such as waterhemp were not expected to be problematic in Manitoba and yet there it is). It’s these new weeds that add risk and uncertainty to crop production systems. By identifying the weeds, the appropriate control measures can be taken to reduce yield impact and prevent future issues.

The “How” of Weed Identification

There are courses taught on botany and weed identification, and it’s really challenging to distill down the massive amounts of information. As an example, Budd’s Flora of the Canadian Prairie Provinces is a mere 863 pages of description for keying out many plants found in Western Canada. Budd’s Flora utilizes words like dioecious (male and female flowers are found on separate plants), reniform (kidney shaped), glabrous (lacking hair) and farinose (the mealy substance on plant leaves like lamb’s-quarters). This is a great resource but is time-consuming and not always easy to understand. With today’s technology, drones are now being used to identify weeds at the field, but the costs associated with that technology may not be economical for everyone.

A relatively effective way to identify “new to you” weeds is to consult other agronomists, weed researchers or weed enthusiasts by way of social media or through smartphone apps. This can get to an answer or at least narrow down the list of possibilities to make sure that weed control strategies address the correct weed.

Relying on a picture for identification does have pitfalls, so here are three pointers to help achieve a more accurate identification utilizing an app or a person:

1. Take a profile picture: Taking a picture from the top down is usually easier, but that makes it really challenging to figure out the height of the plant, the shape of the stem and the leaf attachment. A side view of a plant will help provide more of those clues. Placing an object such as a ruler or a pen beside the whole plant, will help to assess the size of the plant.

2. Focus: As with all good pictures, being in focus is incredibly important and providing a higher resolution image will allow for enlargement of the photograph. Typically, shaded plants will be easier to view, as the bright sunshine tends to lead to an overexposed picture and washed out colours.

3. Showcase individual plant parts or structures: On a grass plant, the collar region (the spot where the leaf blade joins the stem) will help to assess the presence or absence of auricles, ligule and hairs on the leaf blade or leaf sheath. That picture would also help to determine if the stem is rounded or flattened. With broadleaf weeds, the stem picture then helps with leaf attachment and arrangement, as in how many leaves attach at each node and if there is a petiole or not. The stem shape and presence or absence of hairs can also be assessed.

A picture may be worth a thousand words, but there is enormous value to know where the plant is growing (soil type, tillage practices, previous crop), if the plant has a distinctive odour and if the roots are fibrous, a taproot or spreading. Artificial intelligence continues to develop, and crop scouting may eventually be fully automated. Until robotic weeders and spot-spraying drones can cover thousands of acres affordably, weed identification remains an important skill for every farmer and agronomist to prevent or solve the mystery of oddball weed infestations on the farm.