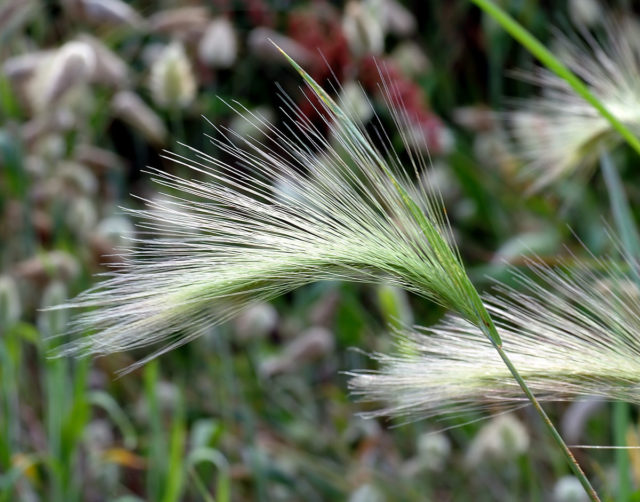 Abundance of foxtail barley, a persistent weed issue for many Prairie farmers, is on the rise. This is evident from its steady increase in rank across the Prairie provinces over the last 40 years, according to weed survey data (Table 1).

Foxtail barley is not a new weed problem in the West. Settlers in Manitoba documented this weed growing in areas of agricultural production almost 150 years ago. At the time, it was largely managed by the intensive tillage and fallow practices used by early farmers. Adoption of soil conservation practices, including reduced and zero till, on the Prairies beginning in the 1970s is one reason given for the increasingly abundant foxtail barley.

But foxtail barley is more than a one-trick pony. Its success can also be attributed to its ability to disperse and establish. As a simple perennial, foxtail barley relies solely on seeds for reproduction. The familiar awned seed heads move readily with wind, animals and equipment. With little to no dormancy, these seeds germinate in a range of soil types for month-long periods in both spring and fall. The only upside is that the seed bank longevity for this short-lived perennial is typically only two to three years.

Like most crops, foxtail barley grows best is moist, fertile soil. However, it’s generally outcompeted in these areas. As such, it’s better known for its ability to thrive in dry and/or saline soils where it gains the competitive edge over crops and other plants that can’t survive in these conditions.

Reduced or zero-till fields are more reliant on herbicides for weed control. Which brings us to another ace up the sleeve for foxtail barley – its ability to tolerate herbicide application.

Glyphosate applied as either a fall post-harvest or a spring pre-seed treatment is generally regarded as the best option for foxtail barley control in annual crops. Application rates of one to two litres per acre Roundup Equivalent (1 REQ = 1 L/ac of 360 gae/L glyphosate) are necessary when targeting this weed. Limited data suggests that the addition of AMS may improve efficacy.

Residual control is the only option for mixed grass/legume hay land and pastures. The herbicide Kerb (propyzamide) must be applied in late fall prior to freeze up to provide activity on foxtail barley in the spring.

Not including Kerb, the Alberta study concluded that residual herbicides do not effectively control foxtail barley on their own and should always be used in combination with glyphosate. It was also noted that, for the best results, herbicides should be used as part of an integrated management approach for this weed.

Nope, not going to rehash integrated weed management here. But my inner soil scientist says farmers need to get to the root of the problem and manage their salinity issues rather than just the salt-tolerant weeds. Planting a forage mix in saline areas of a field to use the moisture that brings up salts may be one of the cheapest methods. Although there’s little scientific evidence, farmers who have tried it suggest that, depending on the level of salinity, soil improved and foxtail barley populations decreased in as little as two growing seasons.

Selecting the right forage mix is critical for establishment in such field zones. Yet another study conducted in Alberta found that forage species like alfalfa, smooth bromegrass, and tall or green wheatgrass were well adapted to and competitive in saline soils.

As a weed article, it is worth ending on that note: always ask for the weed seed analysis of a forage mix before seeding it, as some may contain noxious weeds like downy or Japanese brome. Introducing these brome species to a field might help you forget about your foxtail barley woes but wouldn’t be among my foxtail barley management recommendations.