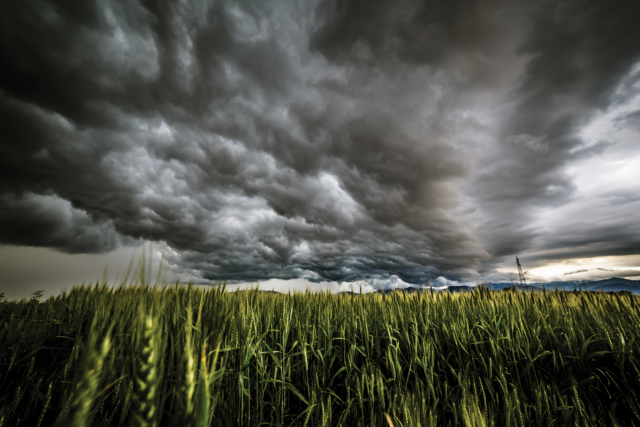 Herbicide carryover is a potential risk every year, which is why a majority of herbicides labels have recropping recommendations. Those crop rotation restrictions are developed based on the persistence of the herbicide and the sensitivity of various crops to plant-available herbicide residues. While many herbicides rapidly degrade to levels that have no perceived impact on future crops under “normal conditions” there are multiple factors that can extend the timeline.

Two of the most important routes of degradation of herbicides involve soil microbes and hydrolysis, and both processes require soil moisture and warm temperatures. Since soil temperatures have not been excessively cool, the primary concern most years is soil moisture. Not only do the microbes need soil moisture to live, but the herbicide must also be in a soil solution in order to be available for microbial breakdown and hydrolysis. When there is a lack of soil moisture, the microbial activity decreases, and rather than degrading, the herbicide molecules will bind to clay and organic matter in the soil. Then, when soil moisture levels are replenished, herbicide molecules will re-enter the soil solution and may impact on any sensitive crops growing in the soil.

The dry growing conditions in many areas in 2020 did result in some undesirable crop impacts in 2021. In addition, drought had a huge impact on this year’s crop production and those areas are likely to have some amount of herbicide hangover in 2022. Herbicide labels have recommendations based on measuring rainfall during the growing season, and minimum rainfall requirements do vary for different herbicides. Without delving into individual herbicide labels, risk assessment maps for herbicide carryover are generated. The question then becomes: what is the best measure of adequate rainfall?

1. Total Accumulation: The risk of detectable herbicide carryover increases as precipitation levels decrease. Extreme risk is typically when there is less than 75 mm of precipitation between early June and late August while normal risk is typically when precipitation levels exceed 150 mm of rain. Looking at individual herbicide labels, the minimum rainfall amounts do not correspond with these maps and growers need to be aware of that. The primary flaw of looking at total accumulation over the summer is that 150 millimetres, or six inches, of rain in a short time will not have the same impact on herbicide degradation as it would if the precipitation was in spaced out and in smaller amounts to sustain microbial populations and maintain good soil moisture in the top layer of the soil where the herbicide is primarily found.

2. First 60 days: Certain herbicides will adsorb strongly to soil if there are dry conditions following application. If the molecules are bound to the soil, they will not break down and the carryover risk increases. Not all herbicides bind strongly to the soil, so this assessment does not reflect all risks.

3. Monthly Accumulation: One risk assessment notice circulated in the fall of 2021 cited a requirement of receiving a minimum of 15 millimetres of rain in June, July or August regardless of total accumulated rainfall, in the brown soil zone, to ensure adequate herbicide breakdown. The minimum amount of rainfall does make sense for mitigating the risk of microbial populations decline and the soil profile being overly dry.

4. Soil Moisture Deficits: Precipitation is an easier measure than soil moisture, but when there are successive dry years, the concern is that the soil never fully replenishes to successfully degrade herbicide residues. There may be value in overlaying soil maps with precipitation and evapotranspiration (moisture loss) maps to more fully reflect where soil moisture deficits exist and risks are greatest. Soil moisture and temperature are the main drivers for herbicide breakdown, but other soil characteristics like soil pH and soil texture will influence the decomposition process and so field maps in the future could become quite complex. While this deep dive would be interesting, basic maps that highlight the highest level of risk are easiest to generate and most likely to minimize crop impact.

After a year with less than normal summer rainfall, the risk maps generated help the agriculture community identify the areas of greatest risk of herbicide carryover, not specific to any herbicide or any field. With new herbicide groups and mixtures of active ingredients, it’s important to check the updated labels to ensure decisions are being made with the most current information. In addition, chemical companies provide guidance under unusually dry situations to ensure that risks are minimized through addition guidelines. These are a launch point for assessing the risk on an individual’s specific field based on field history and precipitation amounts (and timing to make the best cropping decisions). Cropping options may be limited but selecting a crop with the most potential for success is critical in these challenging years.