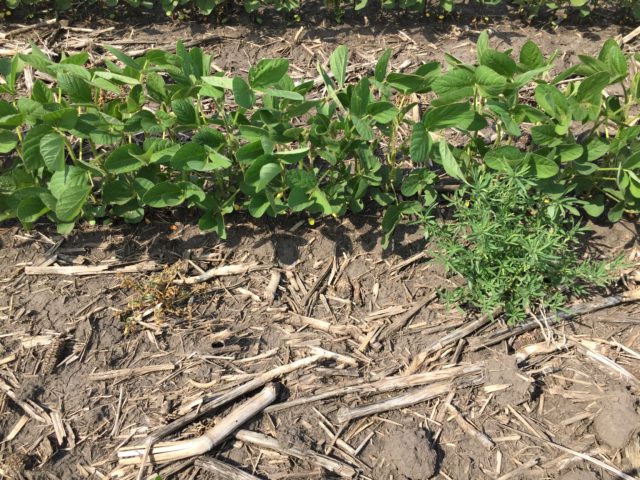 A number of circumstances contributed to this year’s kochia bonanza. Environment, soil salinity, kochia’s competitive ability and herbicide resistance all played a role. Knowing this, what can be done to minimize the problem?

As 2018 started out warm and dry, weeds like green foxtail, redroot pigweed and kochia (C4 pathway plants) got a head start on most crops. C3 plants (wheat, canola, barley and about 95 per cent of the plants on the earth) prefer cooler temperatures and good moisture, while C4 plants are more efficient and thrive in heat.

It’s impossible to control the weather, but weed control is definitely a management opportunity. Kochia typically germinates from early April until as late as June, so a single herbicide application is unlikely to provide complete weed control. On top of that, kochia is more challenging to kill in a drier environment because of its hairy leaves and waxy leaf surface. It’s easier to control small, actively growing weeds, using recommended water volumes, appropriate rates of herbicides and multiple modes of effective action. Herbicide tank mixes and herbicide layering are two options for implementing multiple modes of effective action.

Herbicide layering is a relatively new weed-management concept, which uses sequential herbicide applications to enhance weed control and minimize the risk of developing herbicide resistance. A pre-seed “extended control” herbicide included with glyphosate provides multiple modes of effective action on emerged weeds, while helping to reduce the number of weeds that emerge prior to crop emergence and during the early growth stages of the crop. This results in smaller weeds being present for the in-crop herbicide application, and as previously mentioned, smaller weeds are easier to control.

Kochia is more tolerant of salinity than many grain and forage crops. In years of excess moisture, salts are drawn up to the soil surface from the high water table. In drier years, soil moisture evaporates, and salts are concentrated in the upper levels of the soil profile. Rainfall usually helps to move some of the salt down below the rooting zone, but the lack of rainfall in the past year or two has meant more accumulation near the soil surface. Higher salt levels impact plant germination, as well as soil water availability for plant growth.

Electrical conductivity (EC) is a measurement of the soluble salts in the soil solution, commonly expressed in deciSiemens per metre (dS/m). As a very oversimplified explanation of salt tolerance, kochia can tolerate a soil EC of up to 16 dS/m, barley and alfalfa tolerate a maximum of 8 dS/m while corn and edible beans are somewhere around 2 dS/m for salt tolerance (based on data from Alberta). It should be noted that every saline site is unique, and a proper soil analysis looking at the 0-6 inch and 6-24 inch depths of the soil profile will help determine the nature and severity of the problem. Crop selection based on salt tolerances, establishing a perennial forage or other management options may help but there is no easy solution to salinity.

Kochia can grow up to six feet tall, is estimated to produce 15,000 to 16,000 seeds per plant and is well known as a tumbleweed. A recent study conducted in Lethbridge by Agriculture and Agri-Food Canada put tracking collars on kochia plants and traced them. With the winds howling, the kochia plants reached top speeds of about five miles per hour and dropped 90 per cent of their seed within a half-mile of home. This means that in patches of kochia, the amount of seed that drops off prior to and immediately after beginning to tumble will result in a population explosion in that area. Still, 10 per cent of 15,000 seeds is 1,500 seeds that can easily travel from one quarter to the next and the next and the next.

Kochia seed has low or no seed dormancy. This is a great opportunity when you achieve good kochia control for a year or two, because the seed bank will be depleted and the kochia pressure is reduced. On the flip side, if the plants do manage to set seed, then the seed will all germinate in the next year or two and there needs to be increased vigilance in controlling that population.

This summer in Manitoba, leaf tissue samples submitted for resistance testing confirmed a dramatic doubling in the number of municipalities with glyphosate-resistant kochia. This lab test is an opportunity to assess herbicide resistance in season, so that those weeds are managed appropriately. Not every sample that was submitted was herbicide resistant, meaning that in some cases herbicide rate, application method or environment was the reason for a lack of control.

If herbicide resistance is suspected, due to variable control within a field (one plant dies and the neighbouring plant survives) then confirming resistance is important to identify what will still work to control the weed. Small kochia patches can be eliminated by pulling those resistant weeds. If eliminating the patch isn’t an option, then silaging or baling kochia prior to seed set is an alternative. A kochia plant that is cut off by mowing (or put through the combine at harvest) still has potential to set viable seed. A study in Montana measured an average of 4,100 seeds per plant were produced between harvest (late-July to mid-August) and the first killing frost (late-September).

Post-harvest herbicide application options are being investigated but it’s too early to make any recommendations other than ensuring multiple modes of effective action are used. The post-harvest treatments did not prevent seed production, although it was reduced. When there is known resistance in a weed population, it’s challenging to believe that using herbicides will completely solve the problem.

Setting up for success

Anything that enhances the crop competitiveness, like narrower row spacings, increased seeding rates and early weed control, will minimize the impact of kochia. Row crops that provide wide open spaces will be more challenging and herbicide layering or inter-row tillage will help. Kochia is an annual weed with low seed dormancy and a short seed bank persistence, so anything that reduces seed set is an opportunity to get this weed under control.