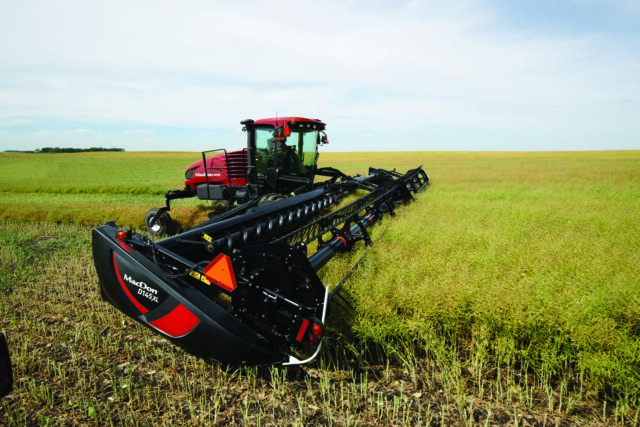 The question of whether to swath or straight cut at harvest time has probably become one of the biggest topics of coffee shop and Twitter talk among farmers in recent years. For many western Canadian farmers, the labour-saving edge of straight cutting—not to mention the advent of shatter-resistant canola—has proven irresistible.

Agronomists generally discourage an either/or approach to swathing or straight cutting in favour of basing harvesting decisions on individual farm and field conditions. For that reason and others, a significant percentage of western Canadian farmers continue to swath, with new innovations available to meet market needs.

MacDon, a leading manufacturer of harvesting equipment, says the two options are often a moving target. In some ways, the company’s array of options for either technique allow it to gauge the mood of western Canadian farmers towards both.

“I think people are always going to be going back and forth,” says Jeffrey Leachman, product manager for MacDon, which bases its Canadian operations out of Winnipeg, Man.

“There have been a couple of bad years recently where people left their crop standing and some strong winds came through, laid the crop down to the ground and they couldn’t pick it up. Whereas if they would have swathed it earlier, harvesting it could happen prior to the snow coming. And then you have a bunch of good years in a row where people might go back to straight cutting,” he says.

The company’s recently released M1 series of self-propelled windrowers (SPWs) and D1XL draper headers are being embraced by farmers.

Leachman points out a number of improvements over SPWs and draper headers the company has released in the past. For the M1, some of these include higher speeds, easier transportation and an attempt to increase operator comfort. Easier control, greater width and draper size are among MacDon’s bragging points for the headers.

But perhaps the biggest bottom line feature is the swather–header’s dual suitability for swathing exceptionally bushy crops like canola, he says, as well as low-podding, downed, tangled or lodged crops.

“The D1XL header is an improvement over our D1X in that its cross-section is deeper,” he says. “That’s really good for when you’re swathing that heavy canola. We have 50-inch deep drapers … while the header sizes range from 30- to 45-feet wide. That gives it a lot of room to convey that crop from the header width right to the centre of your windrow and it’ll form a very nice compact windrow which is great for drying out.”

An optional swath compressor attachment which connects underneath the M1 can further compress canola swaths into stubble, he says.

“It keeps it from blowing away,” he says. “With our high prevailing winds on the Prairies it’s quite common for people to compress their windrows after swathing.”

The M1 features one-touch-return control of the header from the operator’s air-ride seat, including precise control and customization of header lift, height, tilt, knives, reel and draper, he explains.

For farmers swathing late into the evening, the M1 features 360-degree night vision as a deluxe cab option; it’s essentially a series of high-powered LED lights surrounding the machine that allows operators a complete view of their surroundings.

“It virtually turns night into day,” says Leachman. “If you’re flagging you can look behind you, see the cut crop and make adjustments to address the problem. If there’s an obstacle in the field that you need to avoid, the lights can ensure the operator doesn’t have to squint. They can see everything around them.”

The development of the M1 and the D1XL was the result of close inspection of industry trends, he says.

“We looked at how crops are evolving. Canola is getting bushier and heavier and we needed to address that by creating this larger, deep-section draper header that can handle it.”

Honey Bee has built a reputation for header innovation since opening its doors nearly four decades ago. Greg and Glenn Honey got their start in manufacturing by designing a range of equipment for their own farm operation. Within a few years they moved into the retail arena where they became known for their grain belt header.

In recent years, the Frontier, Sask., company has made the harvesting needs of pea, lentil and soybean farmers a focus, culminating in its recent AirFLEX series of draper headers. One of Honey Bee’s key selling points of the AirFLEX platform is its fully flexible cutter bar which can be used in flex mode, considered ideal for harvesting the above-mentioned crops, or rigid mode, generally recommended for cereals. The two modes can be changed with the push of a button.

For the uninitiated, a clean cut close to the ground is key for both swathing and straight cutting many pulses because they tend to be shorter than other crops, says Greg Honey.

While AirFLEX series headers are primarily designed for straight cutting, there’s an adapter available which essentially turns your combine into a swather while using an AirFLEX combine header. This adapter allows the harvested material to drop under the combine in windrows.

“What you do is take the combine adapter out and replace it with the swather adapter,” says Honey. “It takes probably three or four hours to do the conversion [to the swath adapter] but once you’ve done it you can go out and run it without putting any of [the crop] through the combine.”

The AirFLEX header with the adapter is also a fit for organic farming, he says.

“We’ve been using it on our own farm for about six years because my brother farms organically. A lot of lentils and crops like that need to be swathed because you have weeds in them. You can actually swath them with that machine and do a very good job of it. “You’re able to cut very low without pushing dirt.”

Honey says the adapter, which, like most Honey Bee swathing equipment, is only available by order, can also be used to extend the lives of older combines when paired with an AirFLEX header.

“There are some combines sitting around that have kind of expired their usefulness as threshing units but still have good cabs and power trains and would make excellent swather tractors,” he says.

A question of chemicals

Honey Bee also deals into Europe where it has enjoyed success with compact, three-point hitch-mounted swathers that have proven a good fit for transportation on narrow roads in some countries. Swather demand in Western Canada still has a place even with the rise of straight cutting.

Although he’s heard vague scuttlebutt about farmers switching back to swathing, Honey says the future of swathing will most likely depend on future legislation, either domestically or among trade partners, regarding crop protection products. Straight cutting often requires glyphosate at some point during the production process, but that can cause issues among certain buyers, even if pre-harvest intervals are followed.

“Those kind of things nowadays are happening all over. It would be a huge problem immediately for farmers to deal with that but it’s happening in Europe in different places, so who knows?”