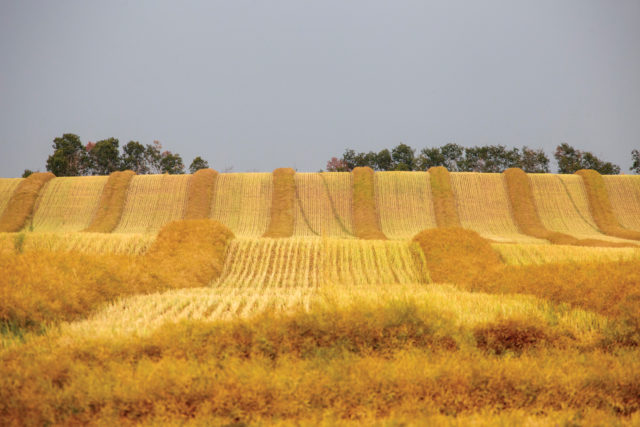 Jim Latrace has heard all the arguments in favour of switching to straight cutting his canola. But for the time being, he’s sticking to swathing.

“After trying straight cutting three or four years ago, we went back to swathing,” says Latrace, who has a 4,500-acre seed farm north of Regina, Sask. “At our place, it saves us money and makes us more efficient. We’re happy with swathing.”

Straight cutting canola started to gain traction on the Prairies about five years ago, when the first pod-shatter-tolerant canola varieties hit the market. Before that, farmers mostly chose to swath to reduce the pod shattering that can happen when plants are left to ripen in the field rather than in swaths.

But the advent of pod-shatter-tolerant canola varieties has given farmers another option, and today, anywhere between 20 to 50 per cent of farmers have tried straight cutting on some portion of their acres.

“We’ve seen a pretty steady rise in straight cutting, and it’s happened relatively quickly,” says Angela Brackenreed, agronomy specialist with the Canola Council of Canada. “The way farmers have adopted this is really quite impressive.”

And for many farmers, harvest management has been the driving force to make the switch from swathing to straight cutting.

“The reasons vary from year to year, field to field, and farm to farm,” says Brackenreed. “For some folks, swathing comes with some challenges, so for them, removing it altogether is a way to get rid of a headache. Logistics have been pushing them to look at different options.”

In certain cases, though, there are good management reasons to select swathing and many of those come down to location.

“There are regions that are pretty consistently limited by growing season right from the get-go,” says Brackenreed. “In those particular regions, they may never see a 100 per cent shift to straight cutting.”

But for Latrace, it’s not just about logistics, though swathing does make combining “a breeze.” It’s also about economics.

Currently, Latrace primarily grows Nexera canola at a premium, and the company doesn’t yet offer any pod-shatter-tolerant varieties. At Latrace’s operation, a non-Nexera variety has to perform 20 per cent better on the same fertility plan to make the same money as a Nexera canola.

“We grew some straight-cut varieties early on, and they would do about eight per cent better than what we did with our Nexera varieties,” says Latrace. “They weren’t paying their way.”

The varieties have improved in the years since then, but not quite enough to convince Latrace to make the switch. Even with the cost of a custom cutter – who can swath 1,500 acres of canola in two days for $14 an acre – the economics don’t pencil out to move to straight cutting.

“With the kind of service I get from him, we’re able to leave the swathing till about 60 to 70 per cent colour change, so we’re yielding virtually the same as we would straight cutting and making a premium on it,” says Latrace. “When you compare the cost of swathing at $14 per acre to Reglone at $15 per acre to desiccate the crop and get it to come in, it’s not costing me anything to swath.

It’s probably saving me money because I don’t have more sprayer tracks, which cost 2.5 per cent in losses. I’m not just after bushel yield – I’m after financial yield.”

For Karlene Oesch, the decision to stick with swathing boils down to risk management.

“Canola is our cash crop, so making sure that cash crop is in the bin and our risk is managed is huge to allow us to continue farming from generation to generation,” said Oesch, who along with her fiance and his family grows 4,200 acres of grain at Scattered Spruce Salers, their mixed operation near Hairy Hill, Alta.

Oesch typically grows anywhere between 1,000 to 1,300 acres of canola in a given year, and while she has considered straight cutting in the past, the growing conditions haven’t allowed her to take the risk.

“It seems like every fall we have the intentions of leaving a quarter standing and see how it goes. But we’ve had snow on our crop before we’ve had a chance to get it off,” says Oesch. “In between getting everything harvested and figuring out desiccation timing, we don’t have the willpower to let it stand. It becomes too scary.

“That’s our cash crop, so knocking it down and knowing we’re going to be able to go through and combine it is more reassuring than that whole wait-and-see that comes with straight cutting.”

For farmers in the central and northern parts of the Prairies, that’s one of the key arguments against straight cutting, says Brackenreed.

“When you’re swathing canola, it’s not super critical when you get out in the field to harvest after. You can swath and that canola crop can be out in the field for three or four weeks through variations in weather,” she says. “With it standing out in the field, there’s more risk there.”

But new genetics are reducing that risk – regardless of whether farmers choose to straight cut or swath.

“Better plant genetics have really helped us maintain our swathing acres,” says Oesch. “Variety selection has allowed us to continue the swathing game a little bit longer than we anticipated.”

“As we get these pod-shatter-tolerant varieties and varieties that were selected for pod drop, they’re also in a sense selecting plants that are going to be better for swathing, too,” she says. “We’re definitely using it as a tool wherever we can.”

Shatter-tolerant varieties are also allowing farmers to swath a little later, giving them more time for the seed colour to change and the yield to fill out.

“We’ve seen some impressive gains in genetics in the last five years,” says Brackenreed. “The shatter-tolerant varieties can offer benefits beyond straight cutting, in that we can leave these crops standing in the field longer to try and capture more yield by delaying that cut timing.”

For farmers who want to skip the shatter-tolerant varieties, there are still plenty of good genetics out there that work well with swathing.

“There’s more buzz about straight cutting, so they’re pushing those lines a little harder, but they’re not rejecting the guy who wants to swath,” says Latrace. “There are still very high-yielding swathing varieties.”

Ultimately, the decision to swath or straight cut comes down to what works best on each individual operation.

“You need to match your decision to your logistics,” he says. “If you have a good swather, don’t be afraid to keep it. If you have access to a custom cutter and you like picking up a swath, do it. But if you’re set up to straight cut already and want to give it a shot, do what works for your logistics.”