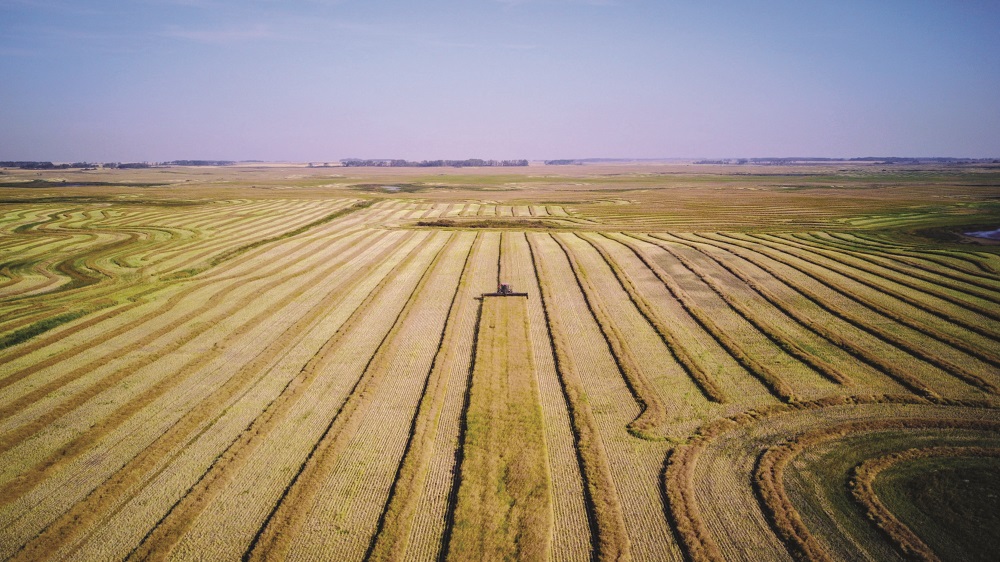 Trevor and Clayton Petersen don’t mess with a good thing. It’s why they swath canola every single year. Except that one time in 2012. They decided to give straight cutting a try, but the panic of watching perfectly good canola inch closer and closer to optimum dryness while the calendar marched on into October was too much to take. The brothers said never again and have maintained swathing malting barley if there’s good weather on the horizon. Otherwise, they will straight cut cereals and always swath canola on their Penhold, Alta., farm.

For Trevor, he enjoys wrapping up harvest by mid-October and in Arizona enjoying the fruits of his labour by the pool. Meanwhile, many Prairie farmers haven’t turned a wheel because their straight-cutting systems mean they start much later.

“My neighbours make it sound like they’ll never own a swather [again],” says Trevor. “I don’t mind spending time in the swather.”

Trevor isn’t alone in utilizing a swather to ensure a smooth harvest.

Ben Foster is MacDon’s product manager and says eventually you get to a northern tipping point where swathing is still the rule and not the exception, in addition to other regions throughout the Prairies.

“We’re seeing more swathing north of the Yellowhead,” he says. “In those more northern areas, you have a little more ground contour and tighter harvest windows and dry down is a little more significant.”

Despite 60 per cent of this year’s seeded canola being shatter-resistant varieties, according to Foster, he is sure the swather will still be a key part of many farmers’ risk-management kit.

“In a lot of cases we’re seeing a time advantage in swathing versus straight cutting,” he says. “When a farmer desiccates a field, we’ve seen it take two to three days longer to get the combine in to straight cut as opposed to swath. For mixed farms, a swather allows operators to cut and condition hay crops, and swath forage crops as well as use it for cereals and oilseeds. We also see swathers used quite a bit for malting barley, where chemical application can be restricted.

“In areas where you are on the edge of that harvest window or have more extreme weather, those two days can make all the difference. Depending when the weather hits, that’s a significant advantage [to be able to swath].”

Beyond geography, there have been many advances in swather technology, as well. Whether it’s an improved ride in the cab for the operator or performance through headers or the machine itself, swather technology has made gains over the last decade.

“The first thing is that it’s more forgiving to operate,” says Foster of today’s swathers. At MacDon, they’ve increased capacity, defined as the speed at which you can swath and form a quality windrow, by 30 per cent in heavy fields with yields of 40 bushels or more per acre. Now, operators can move through fields with efficacy at speeds of 12.8 km/h as opposed to 8 km/h with their new M1 series swather.

“With our 5400 draper header, an operator can control canvas and reel speed on the monitor plus control the lift roller from the control handle,” says Dean Morrell, AGCO’s strategic marketing manager. “Our products can be set on cruise control; it goes with the load of the header. So, if the header sees the load setting higher than it’s set at, it will slow the tractor down itself. You also have large accumulators on the tractor, so you can hold the header and have better flotation. As well, there are bigger drive pumps so you can put more oil into the header.”

Its 9900 series swather also ranges between 160 and 265 horsepower, depending on model, and can accommodate 13- and 16-foot disc headers on three of the four 9900 models, as well as draper and auger headers on all four.

“The technology that’s happening with swathers is the tractor part of it,” says Morrell. “Everything is trying to get more automated to where we get information to the operator and where he can make decisions.”

Giving the operator the most information possible is a good thing and research conducted between 2014-16 by Nathan Gregg helped do just that.

The program manager at the Prairie Agricultural Machinery Institute, based in Humboldt, Sask., looked at differences in headers within a straight-cut system for canola, and benchmarked those results against a more traditional swather and pickup methodology. The trials featured different header selections, including a draper and rigid auger platform, as well as an extendable cutter bar.

His results across his multi-site, multi-year trial showed that there were differences, but not to the point where it might tip the scales definitively in favour of either system.

“I don’t know that any of our treatments or equipment had the greatest impact on success, but the crop condition itself did,” he says. “If you have a crop that in some cases is fairly green and immature as far as stalk and material other than grain (MOG), it can make the machinery behave differently. Depending on the condition, it may affect feeding or threshing, or susceptibility to shatter. It drove home how dependent the machinery was to the crop conditions. While the extendable cutter bar showed some advantages over the others, more so compared to the standard rigid header, in some situations, all three straight-cut treatments failed by a few bushels compared to the swath-and-belt pickup system.”

Gregg says that no matter what, the top reason people use swathers is still related to the harvest environment and how much time and penchant for risk one has when fall rolls around. “Generally, it’s attributed to our harvest window,” he says, adding he believes that a majority of all Prairie farmers still swath some crops, and specifically canola, but the proportion of crops and acres adapts to the condition demands of a given year.

Gregg is quick to add that new shatter-resistant varieties are changing farmers’ plans for harvest, but, in many cases, it also gives them additional flexibility to still swath them, knowing that improved shatter tolerance will be good standing up or lying down.

“A lot of farmers are still growing acres that are shatter tolerant from a harvest-management perspective even without a committed intention to straight cut. They can decide how to farm and extend their swathing window,” he says.

His findings showed that, from a header-loss perspective, the extendable cutter bar fared the best of all the headers tested, especially compared to the rigid, while the draper was middle of the road.

However, while a straight-cut system with the different headers has the potential for increased yields over a swathing system in canola, he found that this is not a guaranteed result. Both systems have inherent risk for seed loss, and it comes down to which system and risks a producer wants to manage.

Another reason certain farmers prefer the swather system is for agronomic purposes, such as reducing green plant material or weeds and to mitigate overheating in bins.

“When you’re swathing, if you have a lot of weeds, you’re cutting those down as you swath,” says Foster at MacDon. “This allows the cut weeds to dry down and can help prevent weed seeds from maturing. There’s cases, variety to variety, in some conditions where if you are straight cutting, some of the plant can remain green; between that and the weed plants, there’s possibility of introducing that into your sample and a potential risk for heating in the bin.” 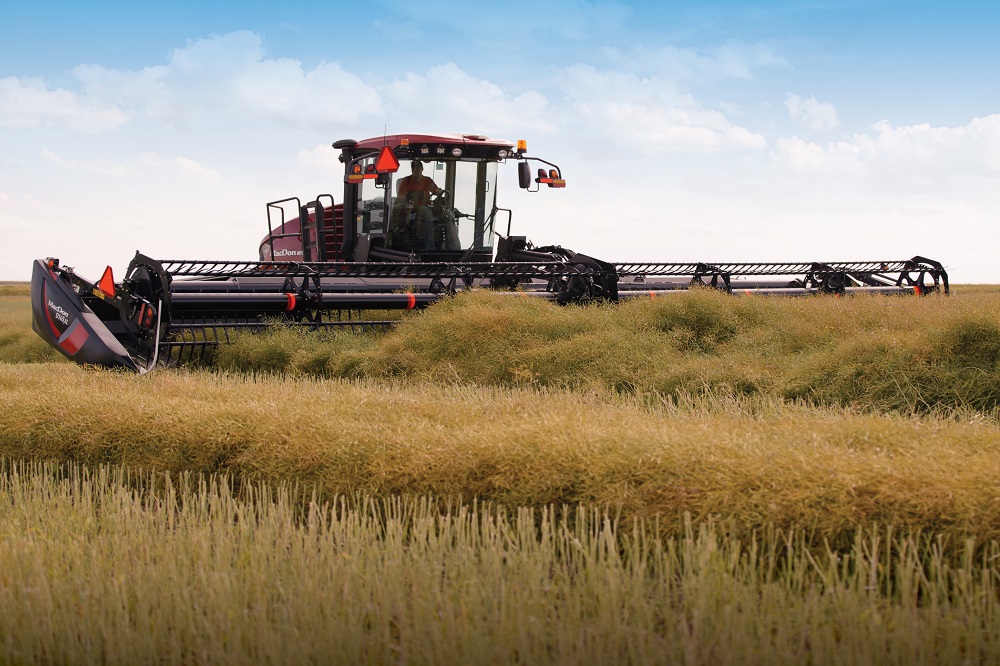 Foster says he saw and heard numerous examples of bin heating in 2016, but not as much in 2017.

Back at the Petersen farm, Trevor and Clayton are still content to cruise in the swather at harvest time and try and control all the variables within their power.

“There’s already a lot of risk in being a farmer and, to me, waiting for your canola to mature and dry down and combine it straight; I just can’t do it,” says Trevor. “Waiting can cost you considerably in quality and dollars in your pocket if it gets rained on or snowed on. We think we can expedite harvest by swathing.”