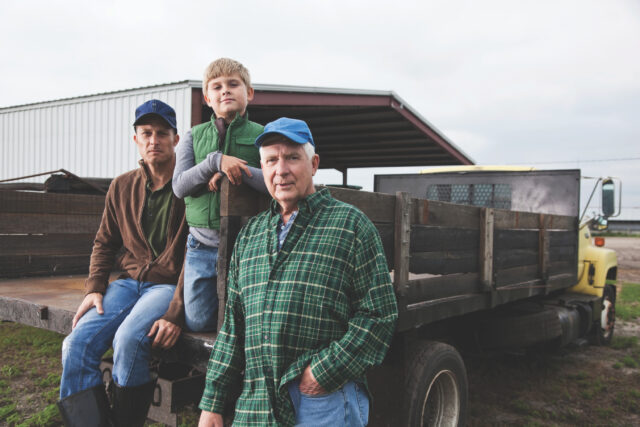 On a mid-November morning, Elaine Froese, farm family coach and succession planning advisor, met with a family to discuss the future of their farm and its eventual transition. In light of the COVID-19 pandemic, the Zoom meeting looked different than her typical kitchen table sessions, but everyone was there – Froese at her own desk, four family members at their table and the fifth away at university.

She was especially pleased to see this family proactively plan for a future that’s never guaranteed. The evening before marked the 32nd anniversary of her sister Grace’s death after being hit and killed by a drunk driver. That incident struck “someday” forever off Froese’s calendar.

“I implore farm families this New Year, when we can’t do the normal fun activities we’re used to, shift your mindset and look forward to the possibility of getting everyone excited and clear about what the future of the family and the farm is going to look like,” says Froese.

Which brings to question: with so much uncertainty in our lives today, why do so many Prairie farmers continue to procrastinate around succession planning? A solid plan ensures the health of the family as much as it protects the wealth of the business.

“Nobody works harder than a farmer, but why not put that same commitment into working with the family around proactive transition,” says Annessa Good, agriculture transition specialist with Farm Credit Canada. “Nationally, we have rising land values and equipment prices. For the junior generation, which might be 22 or 42, the size and scale of today’s operation is such a complex business, often with large debt, that there’s simply too much risk in not planning that path forward.”

Many of the 195,000 farms across Canada will transition over the next 10 years. “I call this the ‘tsunami of agriculture,’ a backlog of farmers not acting,” says Froese. “I’ll have a farmer aged 57 contact me, and one 87 contacting me. That’s 30 years of difference in ages and stages of planning.”

Current numbers don’t indicate a larger percentage of succession plans written over recent years. What also hasn’t changed is the sense of angst and tension around poor communication skills in the family dynamic. Froese pinpoints procrastination and conflict avoidance as the main barriers.

Bob Tosh, partner and family business advisor with MNP, agrees. “There are real psychological barriers in doing this work. Many people struggle to get over that when it comes down to avoiding conflict and how to be fair, or, are very reluctant to admit they’re coming to the end of their working lives,” he says. “[This] goes all the way down to cost and all the way up to significancy of conflict.”

Planning is less daunting when families work it as a process and find guidance with the right trusted professional. “If you focus on a fixed outcome in your mind there are too many things along the way that you do not control,” says Tosh. “View this as a real investment of time and money. You need to acknowledge that this is a significant and complex transition of wealth.”

First, lack of forgiveness and emotional factors that affect planning. For example, the 85-year-old father who takes so long to let go that his 55-year-old son is only just gaining some ownership. “In my world as a coach, that letting go of control needs to happen much earlier,” says Froese. “I like to see 40- year-olds have equity, even before that if they’ve proven their worth and their skill to do so.”

When there’s a disconnect in expectations between business and non-business heirs we also see this challenge. Consider rising land values. “That land is typically being passed on and not intended to ever be sold,” says Froese, emphasizing that in order for the farm to remain viable “farming heirs need their farm to be left intact because they’re a business, they’re not a birthright.”

Good recently returned to residing on her own family farm, suggests families get down to understanding the farm’s fiscal reality as well as the often asset rich–cash poor scenario of Prairie farms. She helps clients focus on what they’re measuring. “Are we looking at the land wealth in fair market value dollars or productive value? The difference between that market value and productive value is usually hundreds of thousands of dollars in difference,” she says.

Parents running the farm while the next generation also works face this challenge, too. “They must now decide how to split up the pie for the off-farm children while the farming child might wake up one day realizing they no longer have a viable business,” she says. “I’ve had parents tell me, ‘I lay awake at night thinking about so much land wealth going to the farming child that we cannot compensate with income [to the off-farm child].’”

For example, putting $50,000 into a city-dwelling child’s bank account is life-changing, it can pay off their mortgage or education. “The same amount of money put into an on-farm child’s account might purchase one-ninth of a combine today, probably not even that,” she says. “We really have to break these situations down to their impact and not their Excel sheet dollar amount.”

The second key challenge, lack of appreciation, affects all generations from those with a sense of entitlement to those who’ve sacrificed through sweat equity, labour or deferral of compensation for too long.

The solution is clarity. “We’ve traditionally worked on promises and handshakes, and that can be the beauty of being in a family run business, but it’s also contributed to generational scars,” says Good. “We need to look at documenting, properly tracking sweat equity and having contracts within a family. People might feel contracts and formal procedures can hurt their family members, but they actually protect the family and the business in the long run.”

Third, pride and stubbornness; these qualities often get in the way of revealing the truth of intent or transparency within plans instead of working through the emotional factors of good planning. “I believe the family dynamic will be much healthier if there are no secrets,” says Froese.

On a positive note, Good’s noticed each generation become more comfortable addressing the “agriculture culture” of not talking about difficult subjects. “Many families I sit with say, ‘I don’t want my children to go through what I went through.’ It is a cycle I think is becoming more proactive over time,” she says.

A natural starting point is with numbers.

How many people will depend on the farm, including retiring parents, the next farming generation and any third-party members? “It’s pretty amazing how many pieces are pulling at this business financially,” says Good, adding that by working together, stress will may quickly disappear.

Froese is in her third succession plan with her farming son after planning with her parents-in-law and then her own parents back in the ‘90s. Her plans are written in pieces rather than one static document.

Clarity, agreements and timelines also ease the process and increase effectiveness. This includes each shift including labour, co-management, collaborative decision making or equity. Shifts may take place over a range of time rather than all at once, but commitment to action is a must.

“The pandemic has amplified whatever pre-existing dynamic was already in the farm family,” she says. “We have a lot of people who are no longer willing to put up with their current scenario and they want to create a new story for their family.”