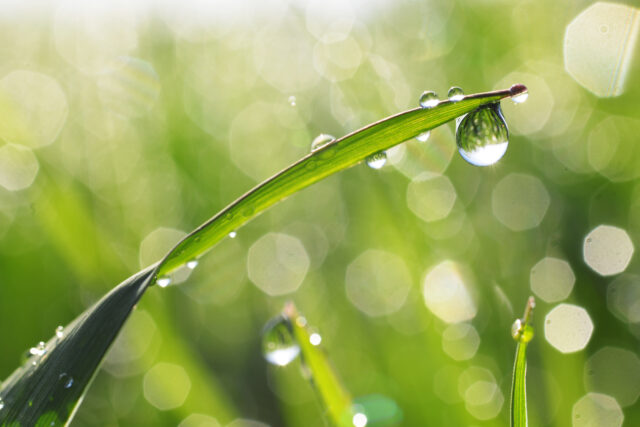 Funny how some issues never go away. For as long as I’ve been in the sprayer business, the question of ideal droplet size for pesticide application has remained a hot topic. At its root are the basic facts that small droplets provide better coverage, making better use of water, but large droplets drift less. So why are we still debating this? Because we need both of these properties to be efficient, effective, and environmentally responsible. Ultimately, the droplet size question is reduced into one of values, where everyone’s individual priorities play a role.

First, let’s talk about basic principles. To be effective, an active ingredient must make its way from the nozzle to the site of action in the target organism. On the way, it encounters several obstacles as summarized by Brian Young in 1986.

After atomization and before impaction, the spray encounters two main losses, evaporation and drift. Both of these are more severe for smaller droplets. They have a greater ratio of surface area to volume for any given spray volume, and can evaporate to a much smaller size, even to dryness depending on the formulation, in seconds. For water-soluble formulations, one consequence is lower uptake. Oily formulations may maintain efficacy, but neither type can escape the second effect, spray drift.

Small droplets are more susceptible to displacement by wind currents due to their small mass. There is no magical size above which drift is no longer possible, but we’ve generally used diameters of 100, 150, or 200 µm as a theoretical cutoff. The proportion of the spray’s volume in droplets smaller than these diameters can be called “drift potential,” and this value is useful to measure the impact of nozzle type, pressure, or formulation on that phenomenon.

But it’s not quite that simple. Even a small droplet may resist drift if its exposure to wind is limited, perhaps through a protective shield shroud, or lower boom height, or by increasing its speed through air assist. Even small droplets resist displacement if they move fast enough.

These mitigating strategies aren’t lost on sprayer manufacturers who have used them for decades to build lower-drift sprayers.

The next phase of the dose transfer process is interception. The droplet has to encounter its target, but the process is mostly coincidence. Simply put, the target has to be in the way of the droplet’s flight path for the two to meet. Denser canopies are therefore more effectively targeted. A larger number of droplets (smaller droplets or more carrier) also improve the odds. But it’s not that simple. Flight paths can change. That’s where small droplets are more inventive. Because they respond to small air currents, and because such small currents surround most objects, the smaller droplets can weave around objects, following the small eddies generated by air flows. That’s why we’re more likely to find smaller droplets further down in denser, more complex canopies where the eye can’t follow. They simply cascade through.

Larger droplets, on the other hand, resist displacement by air and travel in straighter lines. They tend to hit the objects they encounter. For that that reason, larger droplets are intercepted by the first object they reach and only make their way deeper into a canopy if the path is clear. In other words, vertical, sparser objects allow larger droplets to pass by.

These, and the aerodynamic properties of objects such as tiny insects, cotyledons, leaves, and stems, govern the collection efficiency of sprays. Small, slow-moving droplets are then best captured by small objects that don’t create strong enough deflections of airflow to steer these droplets past. Large objects that redirect air around them very effectively are better collectors of the larger or faster droplets whose kinetic energy can guide them through this turbulence. It’s also a meter of probability, as the smaller objects tend to have a lower likelihood of encountering the relatively scarce large droplets of any given spray.

But once again, that’s not the end of the story. Interception is followed by a critical stage, retention. Objects must be able to hold onto the droplets they intercept. Slow motion video has shown that droplets flatten out on contact with an object as the liquid converts impaction velocity into lateral spread. Once at full extension, the flattened droplets will collapse even beyond their original round shape, pushing them away from the surface and possibly causing rebound. A rebounding droplet may eventually land on target, but that would be a matter of fortune. It’s better if the leaf can offer enough adhesion, diminishing the power of the rebound oscillation, allowing droplet to stick the first time.

Small droplets have less mass and tend to be more easily retained. But more than size is at play here. The morphology and chemistry of the leaf surface is also important, with crystalline or more oily surfaces offering less adhesion for droplets. The physico-chemical properties of the spray mixture becomes important, as characteristics such as dynamic surface tension and visco-elasticity affect spray retention. These properties are optimized through the product formulation effort and possibly via adjuvants added to the tank.

When air-induced nozzles were introduced in the mid-1990s, one of their claims was the improved spray retention due to air inclusions (bubbles) in the individual droplets. These bubbles made the droplets lighter, and also reduced their internal integrity, promoting breakup on impaction. As a result, the coarser sprays they produced actually had some of the same efficacy performance as the finer sprays they replaced. And indeed, research showed that coarser, air-induced sprays did in fact maintain good performance. Interestingly, performance of non-air-induced coarse sprays used with pulse width modulation also showed similar robustness of performance. Research comparing air-induced to conventional sprays of similar droplet size rarely showed differences, and when they occurred, they were small in magnitude and could be corrected through improved pattern overlap.

One reason larger droplets still work well is due to the pre-orifice designs of modern low-drift nozzles. This design reduces the internal pressure of the nozzle itself, with the effect being a slower moving large droplet. This reduced velocity takes away some of the force at impaction, reducing rebound.

Another neat effect of coarser sprays is their ability to entrain air. All sprays move air (simply spray into a bucket to see this), and larger droplets do this better and for longer distances. The entrained air is a form of air assist for the smaller droplets, increasing their average velocity and thus reducing their drift potential while they move in the spray pattern.

The final stage of the dose transfer process is deposit formation and biological effect, and that’s where we once again see differences attributable to droplet size.

Once established on a target surface, the active ingredient usually needs to move to its site of action. In certain cases, resting on the surface is sufficient, it depends on the specific product. But for the majority of herbicides, the active ingredient must move across the cuticle into the cytoplasm where it eventually migrates to the enzymes involved in photosynthesis or biosynthesis of fatty or amino acids. The cuticle is waxy, with only a few water-loving pathways and the uptake process is basically driven by diffusion and concentration gradients. As such, it is more effective when the product is in solution and the longer the droplet can stay wet, the better. That’s one reason why spraying during hot, dry days may reduce performance. Again, it depends on the formulation and the mode of action. Too high a concentration can damage membranes, physiologically isolating the active ingredient and reducing its subsequent translocation. It’s always a balancing act.

If you’ve been keeping track of the score, it’s more or less a tie between large and small droplets. One deposits better and makes more efficient use of lower water volumes, while the other has lower losses from drift and evaporation, helps smaller droplets resist drift, and may improve uptake of some products.

And this draw is why the venerable hydraulic nozzle has been so successful for so many decades. Hydraulic atomization, by its nature, creates a wide diversity of droplet sizes, ranging from 5 to 2000 µm or greater. As Dr. Ralph Brown of the University of Guelph used to say, “this nozzle provides a drop for all seasons.” Some small ones for coverage and retention in hard to reach places, and some large ones for uptake and drift-reduction. The result is a robust delivery system that provides reliable results on many different targets under many conditions. In recognition of the heterogeneity of sprays, we don’t refer to specific droplet sizes, but rather their composite, grouped into international categories of Spray Quality such as Medium, Coarse and Very Coarse.

Our challenge is to find the spray quality sweet spot, the ideal blend of these contradictory and yet complementary features of our agricultural sprays. I believe that task is very achievable. Simply put, agricultural sprays work reliably when applied as Coarse and Very Coarse sprays in volumes between 7 and 12 US gpa. There is no need to spray any finer than Coarse for good efficacy, as coverage is already sufficient and any additional coverage has small marginal returns. There is, however, value in adding more water when canopies are denser or when leaf area index grows as the crop matures. To gain coverage, adding water is preferred to reducing droplet size because of the value of environmental protection.

There is perhaps opportunity in going even coarser than what I’ve suggested. It’s certainly required by law for dicamba products on Xtend-traited soybeans and cotton, but even then, only in conjunction with higher water volumes to offset losses in droplet numbers. In practice, moving to Extremely Coarse or Ultra Coarse sprays may allow an application to proceed in higher than average wind without adding drift risk. The use of some additional water is a relatively small price to pay for that additional capability.

There will always be opportunities for efficacy improvement in specific cases for those willing to spend the extra time to optimize that situation. That’s one of the reasons I’m excited to see the widespread adoption of pulse width modulation in the industry, allowing users to change spray pressure and therefore spray quality with no impact on application rate or travel speed. Or the introduction of nozzle switching from the cab, employing the optimal atomizer for a specific location. Although it remains difficult to define the ideal spray, selecting a spray quality has never been so easy.