Home Spraying 101 The Challenges of Spraying by Drone 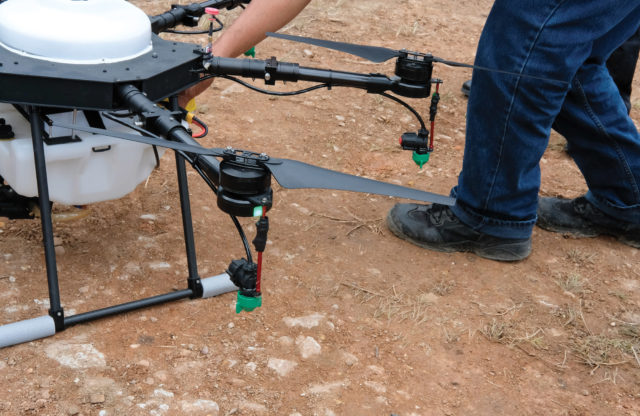 Spray application by drone is here. It’s common practice in Southeast Asia, with a very significant proportion of ag areas now treated by drone. Estimates from South Korea, for example, suggest about 30 per cent of their ag area being sprayed by drone. It’s in the U.S., too. The Yamaha RMax and Fazer helicopters, which pioneered drone spraying in Japan back in the mid-1990s, have been approved for use in California since 2015. DJI, the world’s largest drone manufacturer, introduced their ag model, the Agras MG-1, to North America in 2016. The Ukrainian Kray drone operates at 70 m.p.h. and is for sale in Canada. Other drones are available or in development.

As William Gibson, the author of Johnny Mnemonic, once said, “The future’s here, it’s just not widely distributed yet.”

Proponents of drone spraying cite a drone’s ability to access areas where topography is a problem (such as steep slopes), where productivity of manual application is much lower, or low areas where soil moisture prevents ground vehicles. Operator exposure is reduced compared to hand-held application.

There is no doubt that we need to prepare for a future that includes spraying by drones. Features such as topography adjustment for height consistency and autonomous swath control are already essentially standard, and the capabilities that improve control and safety will continue to improve.

And yet I’ve been nervous about the prospect of pesticide application with drones. My primary concern is around – you guessed it – spray drift. Because a drone payload is relatively small (about 15 kg for the Kray, about 10 kg for the Agras MG-1, and 16 or 24 kg for the RMax and Fazer, respectively), application volumes will need to be low to have any sort of productivity. How low? For manned aircraft with a 200- to 600-gallon hopper, two to four US gpa (18 to 36 L/ha) are the lowest commonplace volumes. The lower volumes require a medium spray quality to achieve the required coverage. Drift control with coarser sprays requires higher volumes.

At those volumes, a drone would be able to do perhaps one acre per load. While OK for spot spraying, it represents a serious productivity constraint for anything larger. There will be a push toward lower volumes, perhaps 0.5 to one gpa (five to 10 L/ha). When we need to spread less volume over the same area and still achieve a certain droplet density, or coverage, the only way to achieve that is with finer sprays. Drones are therefore likely to apply their payloads in fine to very fine sprays, as defined by the American Society of Agricultural and Biological Engineers (ASABE). Finer sprays will increase off-target movement and evaporation. These fine droplets are also more prone to the aerodynamic eccentricities of aircraft, and can result in less uniform deposition.

The current regulatory models for aerial drift assessment in North America, AgDISP and AgDRIFT, are not yet able to simulate drone application. But by entering finer sprays into these models for their conventional-manned rotary-wing aircraft, we can see that buffer zones will be higher. Much higher. And that outcome will give pause to regulators. Failure to control the movement of a spray is, and should be, a problem.

Furthermore, ultra-low volume (ULV) sprays can change the efficacy of some products, and these will require new performance studies.

We don’t know how our regulators will respond to their findings. They will likely demand empirical data on spray drift and efficacy from drones – I would. Since the drones available in today’s market do not conform to a common design standard like fixed- or rotary-winged manned aircraft, each model may need its own study. Some will have rotary atomizers, others will use hollow-cone hydraulic sprays. Some will have electrostatic charging, others may propose special adjuvants.

The obvious question is how these proper application practices can possibly be ensured. Operators will need more than just regulatory approval to use a drone; they will require proper training, similar to what a commercial aerial applicator now receives prior to operating a business.

Recall that our aerial applicators are governed by national organizations, the NAAA in the U.S. and the CAAA in Canada. These organizations are in regular contact with federal regulators to ensure compliance. They also help fund research into application efficacy and safety. They organize conferences in the off-season and calibration clinics in the growing season. At these, flow rates are confirmed and deposited droplet size is measured. Spray pattern uniformity is assessed and corrected as necessary.

Should drone applications be exempt from these controls? I don’t think that would be wise. Are we ready to implement them? Absolutely not.

These requirements would change the drone’s economic model. And despite these precautions, a drone may still leave the control of a pilot due to unforeseen technical or human events.

In the U.S., Yamaha does not sell their drone helicopters. Instead, they deploy their own teams to make the applications. This way, they have assurance that only trained and experienced pilots use the technology.

I recall after 9/11, the U.S. government removed public access to some of our modelling tools for aerial application, as a precaution to help prevent a dangerous agent from being dispensed by aircraft by terrorists. Imagine the possibilities that spray drones represent for nefarious activity. How can this possibly be prevented?

Requests for drone use are no doubt in progress at our regulatory agencies. The outcomes of their risk assessments will provide important initial guidance, and food for thought and discussion. They may even change the mind of registrants.

Until that time, application of any pesticide by drone remains illegal in Canada.