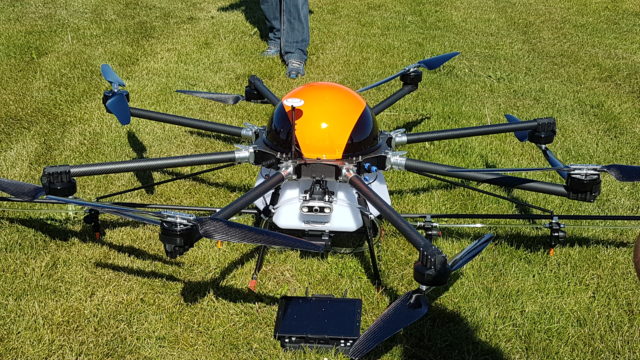 The prospect of applying pesticides by drone in Canada has a lot of people talking. Some are excited about the possibilities. Others are concerned about safety. New spray drones are constantly being introduced and improved, even by small companies and startups. The question is really whether this should happen, considering that it already takes place in many other countries and anyone can purchase a spray drone for a reasonable amount of money.

Instead, the question is: what do we need to do to ensure it can be done without harm to the general public, to off-target areas, to bystanders, and perhaps most importantly, to the image of agriculture as a responsible industry.

There are three broad categories of drones, now called Remotely Piloted Aircraft Systems (RPAS). The first category, an RPAS weighing less than 250 grams, is primarily for recreational use and requires no certification by the operator. Another is RPAS weighing more than 25 kg. The most common category being RPAS between 250 grams and 25 kilograms, require either a basic or advanced operator certificate. Either certificate can be obtained by simply passing a test administered by Transport Canada. A training class that covers important topics is helpful and recommended to prepare for this online exam. I took such a class, studied the supplied materials and obtained my basic certification in spring 2019. There is lots to learn, including basic RPAS characteristics and maintenance, flight planning, weather conditions, airspace designations, radio communication and communication with Transport Canada. An RPAS must also be registered with Transport Canada and its registration number placed on the aircraft.

Someone wishing to fly in controlled airspace that may require communicating with a control tower or piloted aircraft, or planning to fly near or over bystanders, requires an advanced certificate (passing both an advanced test and a flight review with an authorized pilot). The examination for an Advanced Certificate is difficult, which will be a significant deterrent.

That’s just for operating an RPAS legally. Those wanting to carry dangerous payloads such as pesticides, operating beyond visual line of sight (BVLOS), require a Special Flight Operations Certificate (SFOC) for each such operation, applied for online and requiring lead time for approval.

All of the above gets you flying a drone, and the process is administered by Transport Canada. But discharging material from and RPAS is a whole other activity, and if that material is a pesticide, it involves approval from the Pest Management Regulatory Agency (PMRA). The PMRA has not yet provided this approval.

If you were responsible for ensuring safety during the application of pesticide by RPAS, what might you want to know?

First, I imagine the PMRA wants to ensure that pesticides will work and persist as expected from an RPAS application. This means efficacy testing, perhaps additional data confirming a uniform deposit pattern. In the past, registrants have been allowed to submit surrogate data for fixed-wing aerial application. Basically, so long as the application volume and spray quality match that of an aircraft, the research application can be made by ground. Time will tell if this principle is transferrable to RPAS, due to the much greater turbulence generated by the RPAS rotors, particularly at low-flying heights, resulting in the redistribution of the spray both laterally and possibly vertically in a taller canopy. RPAS-specific product rates may be the outcome of such testing.

Second, you might want to be sure the operator can do the technical task and is qualified. How is the RPAS calibrated? How is the correct application rate ensured? Is the operator competent in using the guidance software? Does the operator have access to the necessary meteorological information?

Of course, spray drift will be a concern. The PMRA has a mandate to protect sensitive ecosystems from drift damage, conducts assessments of drift risk and mitigates risk via registration decisions that may include label application restrictions or buffer zones.

For ground sprayers, the PMRA is concerned primarily about spray quality, boom height, and wind speed. The make of the sprayer or its travel speed are not considered. For aerial application, the PMRA considers spray quality, spray height, wind speed, but also specifies aircraft speed, boom width relative to wingspan, as well as air temperature and relative humidity, in its models. These models guide risk assessments for a typical fixed-wing and a typical rotary-wing application, but the assessments are not aircraft-specific because the various aircraft are, in fact, quite similar to each other.

Again, RPAS introduce significant new variability into this assessment. The impact of four, six, eight, or more rotors, the presence of fixed-wings in hybrid systems, of nozzle location (under rotors or on separate boom), of relative position of boom to rotors (in front, under, behind) on spray deposition and drift is largely unknown. Flying height and speed will likely also affect drift, adding complexity.

It’s hard to predict which of these, if any, will have meaningful impacts on spray drift and product performance. The only way to find out is to conduct studies, run the relevant models, if available, and make the best possible decisions.

Whose responsibility will it be to generate testing standards and provide the required data? Can we assume all RPAS perform similarly, or will we test each one and have “approved” drones for aerial application? Or will the reasonable worst-case be assumed for all, regardless of their characteristics?

These are formidable tasks to study before assurances of safety can be secured. Fortunately, the USDA-ARS  (Agricultural Research Service) has an aerial application research unit at College Station, Texas, where such tests have been conducted and continue to be carried out. Initial data confirm the importance of spray quality (coarser sprays behave more predictably) and flight height on pattern uniformity. We’ll need more of these data from other institutions to make an informed decision.

Recently, a working group was formed to share resources and discuss issues related to RPAS spray application. The group has representation by the PMRA and Transport Canada, as well as researchers, registrants, retailers and applicators. Ultimately, the decision of whether to allow RPAS spray application, and under what terms, rests with the PMRA. But even with formal approval, the responsibility to apply products safely remains with the applicators, as it always has, for all methods. Let’s continue to take that responsibility seriously. The reputation of agriculture depends on it.