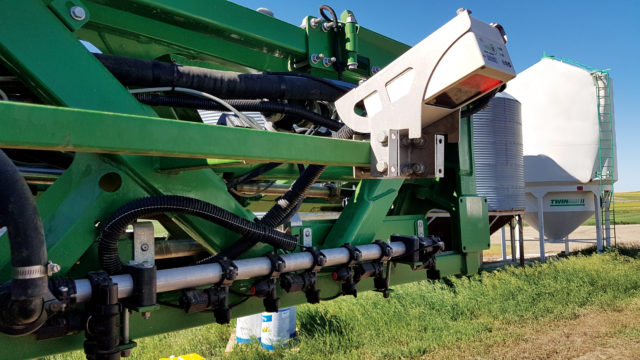 Site-specific treatments have long been a goal in agriculture. It makes sense to provide inputs or treatment at rates that reflect the local situation. To a large degree, those capabilities have been available for fertility and seed inputs for some time, with input zones reflecting soil types or topography.

But the sprayer world has not seen as much site-specific treatment. The reasons: pest maps are time-consuming to generate and their usefulness may be short-lived; weeds are fairly ubiquitous, and it usually makes sense to treat an entire field; and sprays are relatively inexpensive compared to fertilizer or seed.

When it comes to spraying, we need to redefine site-specific.

While traditional zone maps (corresponding to, say soil type and/or elevation or slope position) allow unique treatments on a scale of acres, new sensors have allowed sprayers to basically leapfrog this approach and treat each square foot uniquely. These sensors identify plants directly and create an immediate treatment response.

The idea, and technology, has been around agriculture since the early 1990s, with Concord DetectSpray and later Trimble WeedSeeker. For various reasons, these never became widespread. New cutting-edge technologies are about to change this.

WEEDit is an optical spot spraying (OSS) system manufactured in the Netherlands by Rometron (https://www.weed-it.com/), and has been available on the market for several years. It is widely adopted for use in Australia and South America, is now making inroads in North America.

WEEDit spray booms contain sensors placed at one-metre intervals. These scan the ground ahead of the boom, identify the presence of plants and trigger the nozzle in line with the plant. The sensor contains five channels so its resolution is actually 20 centimetres wide. The boom therefore contains a nozzle every 20 centimetres, and this nozzle has a correspondingly narrow fan angle that treats just this space.

The detection principle is based on the quality of light that is reflected from living plant tissue compared to everything else.
A red or blue light is emitted, and chlorophyll-containing plants reflect a unique wavelength that differentiates them from ground or dead plant material.

The response time of the system is very fast. Triggered by small solenoids, a travel speed of up to 15 miles per hour is possible when the sensor looks one metre ahead. Furthermore, the software allows the user two important controls. First, the sprayed distance before and after a detected plant can be buffered between five and 20 centimetres, resulting in a sprayed patch between 10 and 40 centimetres long. This could be useful when boom heights fluctuate and placement of the sprayed patch shifts accordingly. Second, the user can select from among four sensitivity settings. Higher sensitivity can detect smaller weeds but will also result in more false results.

One reason the system has been successful in the Southern Hemisphere is the long growing season that may require multiple spray passes outside of the crop each year, and where the weeds are relatively large at treatment time and therefore easier to detect. In North America, the pre-seed spray window is relatively narrow and weeds may be very small or just emerging. The risk of a miss due to non-detection is therefore greater. The WEEDit system has a feature that addresses this risk.

The solenoids that trigger an individual nozzle are pulse-width modulated (PWM). This means the application rate is adjusted according to travel speed which offers an innovative feature: the entire boom can be programmed to spray a defined fraction of the full dose, to a maximum of 50 per cent, as a background broadcast rate (called “bias”). The smallest weeds that escape detection are likely to be susceptible to this lower dose. Larger weeds are then detected and sprayed with an individual spot spray at the full dose. Bias is typically set to about 25 per cent; savings are less, but control is improved for those very early season situations.

Currently, several hundred WEEDit sprayers are operating in Australia. Since 2017, there have been five installations in Western Canada, and about 25 in the U.S. Midwest. Savings compared to broadcast spraying range from 65 to 85 per cent.

Similar systems are in development by other manufacturers, and the future looks very promising.

Another approach is pioneered by a company called Green Eye Technologies (http://www.green-eye.ca/index.html). They have developed plant recognition algorithms that are currently able to identify 150 different species. Green Eye has launched a business in Canada that scouts fields by high-resolution drone imagery, and then provides customers with species-specific distribution maps (https://youtu.be/nlXc7TVoegI). Plant counts can show crop establishment and species composition by zone. When this information is converted to a prescription map, rate and tank mix composition could be varied as necessary by zone, or weeds can be sprayed individually. The agronomic value of this information is clearly very high.

Cost Savings: OSS has an appealing rate of return on investment. On a 5,000-acre farm, a pre-seed treatment of glyphosate plus tank mix for resistance management may cost $10 per acre, or $50,000 per year. At an average savings of 75 per cent, that represents $37,500 per year. Add other non-crop uses, such as post-harvest, and savings increase. With eventual weed recognition in-crop, virtually all herbicide treatments are candidates for such savings.

Herbicide Resistance Management: Delaying the onset of herbicide resistance requires the use of multiple effective modes of action in a tank mix. Cost of tank mixes is a deterrent to this practice. With OSS, these tank mixes become affordable.

Efficiency: With 75 per cent product savings, a tank of product will last longer. The time lost to hauling water and product, as well as filling the sprayer, will decrease. For example, WEEDit users are spraying a full day on a single load. Or they may choose to use a much smaller load, decreasing equipment weight.

Pre- and Post-Harvest: Whether for desiccation or weed control, site-specificity of late-season sprays can also be based on living tissue. Only regions in the field requiring the desiccant are treated. Perennial or late-season weeds are selectively controlled pre-harvest. Since herbicide rates in these applications are typically higher, savings are significant.

Producer Innovation: One user of the WEEDit system in Saskatchewan developed an innovative use. Having missed a pre-seed spray, the applicator was faced with large weeds in a one-leaf Roundup Ready canola crop. By turning down the sensitivity of the system so the canola crop did not trigger the sensors and turning on bias mode, he was able to broadcast spray the field at a low dose (sufficient to control the small weeds) and then apply a full dose to the larger weeds, triggered by the sensor.

License to Farm: OSS makes intuitive sense not only to applicators, but also to the public at large. Showing and using these technologies demonstrates stewardship practices that are easy to communicate and understand.

Rapid development and improvement of these technologies is ongoing. Finally, we may have all the pieces that can bring site-specific weed management to market.