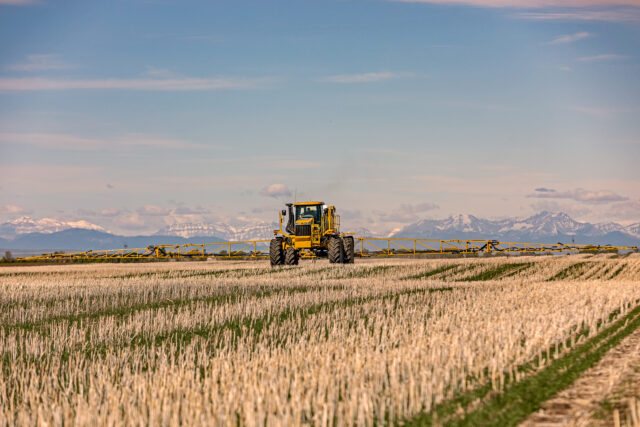 Some years ago, a friend recommended that I read The Tipping Point by Malcolm Gladwell. In this book, Gladwell tries to understand why some things catch on, and others don’t. It’s a compelling read full of Gladwell’s trademark stories and his knack to deftly interpret scientific studies. He talks of connectors, mavens, and salesmen, as well as the “stickiness factor”, a measure of how memorable something is, as keys to success of products and ideas. I think of the book often as I ponder the many good ideas in agriculture, most of which never see widespread adoption.

One of these good ideas is spot spraying. Green-on-brown detection was first introduced in the early 1990s. Anyone remember the Concord DetectSpray? Green-on-brown grew to the WeedSeeker a few years later, and found widespread success in Australia with WEEDit. Spot spraying did not gain any traction in Canada during this time.

Australia is unique in many ways, not the least of which is their summer spraying practice. Summer is the hot, dry season where land is fallow and weeds are kept in check with herbicide sprays. Making several passes over a field, combined with the need to control some larger and hardy plants, is expensive, and a spot spray saves much of the cost. The savings can be put to use with more effective herbicide tank mixes that delay the onset of herbicide resistance. Spot sprays pay for themselves in short order Down Under.

It’s more of a challenge in Canada where burnoff occurs in a short window before seeding and sometimes after harvest, and where herbicide resistance is not as widespread as in Australia. But nonetheless, spot sprays have a fit for many of the same reasons.

WEEDit is the first system to make any inroads here, with about a dozen systems having been retrofitted to high-clearance sprayers in Alberta and Saskatchewan. High detection accuracy and hardware reliability is proven in three seasons.

On March 2, 2021, John Deere entered the green-on-brown spot spray area with See & Spray Select and will compete with WEEDit. But more importantly, it provides validation of the concept like only a major manufacturer can. Yes, we’ve reached a tipping point.

While the first green-on-brown units are becoming established, green-on-green, the ability to detect weeds within a crop, continues to be developed around the world. French startup Bilberry has made enough gains in Australia to bring its product to market with Agrifac, where it’s called AIC Plus. In farmer field trials, they have achieved 90 per cent detection accuracy of wild radish in Western Australia, and claim that they are ready for broadleaf weed identification in wheat, barley and oats. Bilberry’s technology will also be seen on Australia’s Goldacres and France’s Berthoud. Other startups, notably Israel’s Greeneye Technology, plan to introduce a green-on-green system in the U.S. in the near future. Amazone, partnering with Xarvio and Bosch, announced their plans at Agritechnica to have a commercial unit for sale by 2021.

This technology will have significant impact on sprayer design philosophy. At present, productivity is synonymous with capacity, and large tanks with commensurate heavy and powerful tractor units dominate. Spot spraying savings will depend on weed density and hardware resolution, but 50 per cent to 90 per cent reductions in spray volume can be expected. A 1,600-gallon tank would no longer be necessary. The savings in frame weight and horsepower would be significant, as would the time savings from less intense tendering demands. These savings would offset the lower driving speeds that accompany sensing technologies, and, overall, provide a lower bar for autonomous operation.

The savings in brute size will be countered by increased sophistication. Better boom height management is essential for spot spraying, not just for the sensor to properly see the target and estimate the time needed for the boom to reach that spot, but also for the spot spray itself to deliver the right dose. In any fan spray, band width at ground level changes with height, and that, of course, is related to dose. Trailed booms can address this issue. With growing utility of soil residual herbicides, dual tank sprayers—small tank for the spot spray, large tank for the broadcast residual—make sense.

Plant detection and identification bring other opportunities. Plant size is one of the first, perhaps adjusting dose to cater for harder to control weeds.

Spot sprays rely on fast, precise response of the nozzle, and this provided by fast-reacting solenoids that are part of pulse-width modulation (PWM) systems. On a broadcast sprayer, these solenoids can change the emitted dose instantly, within a certain envelope, by altering the duty cycle of the pulse.

If a plant that needs a higher dose was identified, that would be an opportunity to deliver a custom rate. Multiple nozzle bodies that are able to spray one, two or more nozzles in the same spot simultaneously, may be needed.

This also brings direct injection into play. Current systems introduce the active ingredient into the boom upstream of the nozzles, affording it time to mix into the water. For true spot spray utility, though, direct injection needs to be at the nozzle. Only then can custom mixes and rates be applied on a spot basis.

Spot sprays have agronomic benefits. By recording the location sprayed, weed patches can be mapped. As plant identification becomes possible, is it conceivable to obtain plant species and stage distribution maps from the spray pass? That would turn the sprayer into a high-resolution crop scouting tool. The agronomic value of such maps, especially if created over the course of the growing season, is immense. Of course, data density, handling, and storage will constrain this.

What will a future spot sprayer look like? Although it will have tanks and booms, the level of electronic sophistication will make it so much more versatile we can’t yet imagine all the ways in which it might be used. But it seems we’re accelerating toward that future.