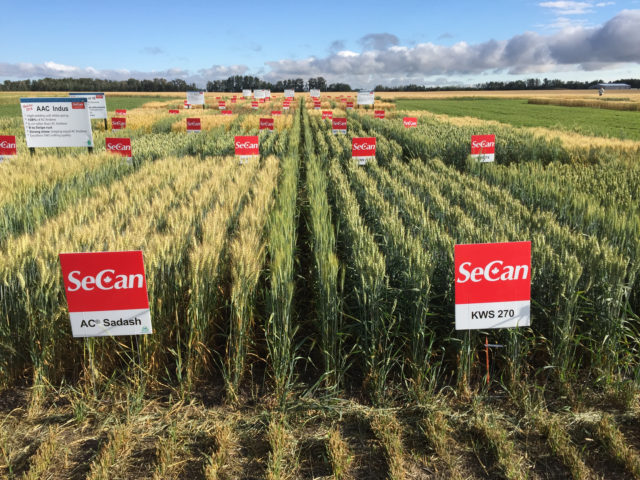 While the value creation conundrum continues, Canada’s seed industry is taking the lead. In February of this year, the Canadian Seed Trade Association (CSTA) and the Canadian Plant Technology Agency (CPTA) announced the launch of the Seed Variety Use Agreement (SVUA) pilot project in efforts to draw more crop variety development dollars.

Currently, two primary models have been discused: the end-point and the trailing royalty. For the seed industry, a trailing royalty in the form of implementing an SVUA, has been widely accepted as the most appropriate and implementable. Varieties selected into this model have an SVUA attached when growers purchase them. Any farm-saved seed planted each year thereafter are invoiced a Seed Variety Use Fee (SVUF).

The seed industry welcomes the program as a step forward, but Prairie wheat and barley groups have expressed concern, leaving some to wonder if the industry’s public and private sectors will ever agree on a solution.

Both sides have one thing in common. Their stakeholders have invested into breeding research and they want to protect that investment. As the pilot unfolds, both sides will watch closely to see how revenue is distributed back into both private and public programs.

Tyler McCann, interim executive director with the CSTA, says the private sector in Canada’s seed industry has significantly ramped up its investment in seed research since Canada’s 2015 ratification of UPOV 91. Private sector investment is now at $23 million annually, up from $3 million before the deal.

“Growers are now seeing the benefits of this in two of the varieties that are in for this year,” he says. “Canterra Seeds and Limagrain Cereals Research Canada are directly a result of [that] increased investment.”

But producer organizations are concerned about the public programs they’ve invested in as well and want assurances, especially on public varieties.

“I cannot stress enough that because producer and public dollars have developed those varieties, we want to ensure farmers continue to have a say in that and continue to have a strong producer–public breeding system in place,” says SaskWheat chair Brett Halstead.

Meanwhile, Todd Hyra, western business manager at SeCan, sees the SVUA pilot as an opportunity for both sides to win.

“The goal of the SVUA is to enhance the royalty portion for breeders,” he says. “It’s about stabilizing some of the income, providing a platform that works for both private and public breeders and ensuring there’s an additional stream that rewards a breeder for a job well done.”

So, just how did things come to this point of dissention?

After seed value creation consultations led by Agriculture and Agri-Food Canada (AAFC) and the Canadian Food Inspection Agency (CFIA) gained momentum in early 2019, the process was suspended ahead of the federal election.

McCann says consultations revealed starkly different viewpoints and government realized this would take a long time, yet wanted industry to take a leadership role to build support for one model.

Prairie producer groups are still feeling the sting from the discontinued talks.

“We’re disappointed that AAFC and CFIA didn’t show a commitment to finishing these consultations,” says Halstead.

Producer groups want to see AAFC clarify what its long-term role and plans are in value creation, particularly since farmers have invested in public variety development for years.

Meanwhile, the seed industry sees a number of drawbacks within the end-point model that make it less desirable.

For one, Hyra says the trailing royalty model works across all crop types, whereas the end-point system is better suited for products typically collected by larger central handlers such as malt barley or milling wheat. “Looking into other crop types like feed grains, silage crops, anything fed domestically through livestock or often used locally, these get missed,” he says. “Those crops would be completely left once again outside of any collection mechanism that would provide them support.”

It would also require customers to make another declaration with a grain handler, bringing a third-party into the process, adding a degree of separation between the breeder or representative and the farmer.

“It makes it awkward and introduces an extra level of potential slippage,” says Hyra.

While the seed industry agrees on trailing royalties as a preferred system, McCann notes others have failed to coalesce around one single option.

“We’ve heard complaints around every single idea on the table,” he says. “We think the SVUA model addresses a lot of the concerns that farmers have.”

“The seed industry was stuck on only reviewing two options,” he says. “They weren’t looking at anything through crop insurance, credits through using certified seed or any other options out there. It seems AAFC and the CFIA have allowed them to pick a winner before the consultation process was completed.”

He says most producer organizations don’t have a preferred model and last winter’s consultations were just beginning to get people listening and thinking about the different options.

What’s involved with the SVUA pilot?

It’s hoped the pilot will demonstrate how the model might work and give people a chance to see that. Essential to the program is its online platform, expected to be operational this year.

The single system will connect multiple seed companies, distributers and breeders with farmers.

“One of the real priorities is to make this as easy as possible for the distributer, the retailer and the farmer to use while reducing the number of interactions between these different points,” says McCann.

A breakdown of the process looks straightforward. A farmer has an account and seed companies and retailers enter into the platform when a farmer purchases seed with an SVUA. The following year, the platform sends a message indicating which SVUA-attached seeds a farmer purchased and requests them to declare how much of that seed they kept for replanting in 2021. A farmer enters these details and the platform provides one invoice from the various applicable companies. Payment is collected and the money is distributed back to the involved breeder, distributer or companies based on each royalty the farmer paid.

The seed industry’s role in the pilot is based around the platform and not variety selection. “It’s up to companies to decide for themselves whether or not they’re going to nominate or select varieties into the pilot,” says McCann, adding the CSTA and CPTA don’t select varieties.”

He says seed companies are committed to ensure farmers will see the value in any varieties brought into the program and that they have choice.

“It won’t be for everyone. We recognize that some of our retailer members are not ready for it yet and others will welcome it,” says Hyra. “I believe the same with our customer base.”

However, producer groups are confused, particularly around two public wheat varieties, Starbuck and Wheatland,  as there has been online chatter they may be included in the pilot.

“These varieties were significantly funded by producer dollars through our wheat commissions and the Western Grains Research Foundation prior to that,” says Halstead. “This leaves us wondering, what’s the commitment of AAFC to developing and protecting these varieties from trailing royalties? It makes me wonder if government agencies have their licensing agreements in order.”

Hoping to resolve some of the ongoing tension, the pilot includes a working group to draw engagement from all sides. “We have a really strong commitment to transparency, value and choice. We want farmers to be able to see and understand how the SVUA mechanism lives up to these three parameters,” says McCann.

Those parameters are farmer experience, retailer experience and understanding revenue distribution. Like most Canadian ag programs, discussions must continue, whether friendly or fiery, to give everyone a chance to speak.

“In order to come up with a solution that works for everyone, we still need greater consultation with producers to hear their options, opinions and understand the impacts this might have on their farms,” says Halstead.