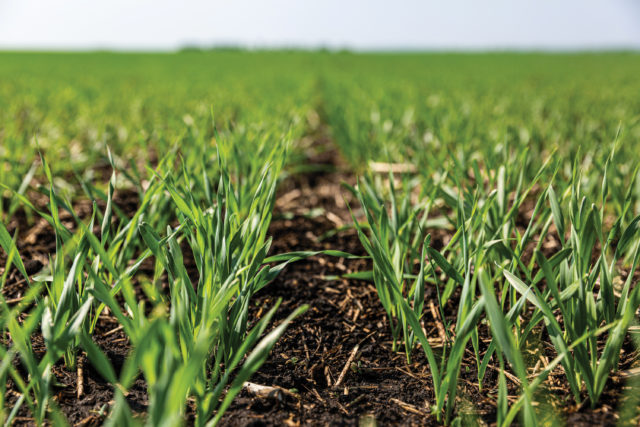 Ever since precision agriculture entered the fields of western Canadian ag, the concept has been complex and, frankly, overwhelming. Skeptics often cite that it’s also too tough to truly know that the pretty penny spent on the practice is specifically providing the competitive edge to put it back in their pockets.

“As an industry we did a lot of disservice to ourselves early on,” says Terry Aberhart, Saskatchewan agronomist and CEO with Sure Growth Solutions. “Some of the approaches and philosophies given by some companies insinuated there was only one way to do things. The reality is there is no right or wrong way to do anything, but there’s probably a better way for your farm.”

Adding to the conundrum is the fact “precision agriculture” is an umbrella term encompassing so many technologies and practices. Yelto Zimmer, head of agri benchmark, a global non-profit network of farm economists, defines it in a simple two-pronged approach. “[It’s] the ability to, first, develop appropriate strategies for site-specific application of inputs, including seeds, fertilizers and other crop care,” he says. “And second, to execute those strategies in an efficient and accurate manner.”

Because it means many things to many people, the ways any given farm can adopt it are varied and go from simple to intense. Every service provider is different and there are many combinations of what they offer and how they offer it.

The basics of most companies lie in soil testing, creating management zones and variable rate (VR) fertility plans or prescriptions based off those zones. Then there are added offerings such as strategic planning, scouting, VR fungicide, yield mapping, cropping mapping scenarios and other agronomy practices.

Services are charged either by a fee per acre or as a flat rate contract fee. The yearly cost doesn’t tend to change, but zones per field and program intensity can come into play as well as higher start up fees for more intensive approaches like electrical conductivity data and mapping.

The challenge lies not in understanding everything at once, but rather determining the uniqueness of any given farm, and then finding which precision approach can offer the best advantage to that operation.

Take for instance Bentley, Alta., farmer Jason Lenz. He, like most farmers, says he knows his fields like the back of his hands, but he’s always looking for ways to know more. Up until five years ago he regularly conducted his own soil sampling in order to plan for each upcoming year’s nutrient and fertility application needs.

“I thought there had to be a better way and that’s when we started looking to work with a precision ag company,” says Lenz, adding that the family stepped into the practice gradually, having adopted GPS guided steering on their equipment and then began looking into VR fertility.

They’d been watching various companies for over 10 years, noticing the service levels offered from smaller specialized companies to larger full-service providers. They settled into a mid-grade service package heavily based on comprehensive soil sampling and formulating field prescriptions at $4.95 per acre.

“We feel per acre this is really reasonable and for us it’s pretty simple,” says Lenz. “If you don’t think you can make five bucks per acre back off of doing it, why would you try. It should be really easy to make back.”

Others may not be sold on this simplicity. With so many variables at play field-to-field and even within each field, how can farmers like Lenz be sure precision ag is the reason for success from one year to the next?

Zimmer understands this sentiment. “I fully subscribe to the notion that understanding the drivers for in-field variation is key. To me this is the major challenge,” he says. “To be honest, without some kind of site-specific trials it can be very difficult to prove which elements of precision farming are really profitable or not.”

He wants more sufficient publicly available data as the basis for entrepreneurial decision-making in western Canada. “What might be a solution is to form growers clubs or peer groups and to jointly test and evaluate approaches,” he says.

Until then, there are steps farmers can take to overcome evaluation challenges. Understanding the relationship between precision practices and return on investment starts with establishing expectations.

“Growers need to identify what they’re trying to manage,” says Aberhart. “What is the variability? And, what’s causing the variability in the fields. Is it water, topography, salinity, soil type, nutrient variability? Identify these challenges up front, then figure out how to take advantage of precision approaches to manage that variability.”

It’s also essential that results be measured over the long-term, particularly when working with VR technology and changing soil fertility. This means capturing good yield data to work with and track trends over the long-term. “You can prove these things by looking at the data and measuring it, but you need to have that reporting and benchmarking figured out,” says Aberhart.

Farmers can then use that data and study their yields to create profit maps. “We take our yield times its price, which is a simple way to get your gross revenue per acre. Then minus all your costs, fixed and variable, which change by zone depending on how much inputs are applied to each zone,” says Aberhart. “You can then create a map that shows the profitability of the farm.”

Using this technique, Aberhart identified poor areas in the field losing money every year on the family farm near Langenburg, Sask. “It’s counterintuitive to what most farmers’ instincts are, we want to farm every acre of land, but by continuing to farm these poor areas in the same way, we were adding to the problem.”

He took these acres out of production or shifted them into something better suited for those areas such as hay.

He also works to understand the best places to invest using on-farm trials. One study involved four adjoining fields with the same historical yields. “We took three of them and used VR fertility, leaving the fourth in flat rate,” he says. “For the next four or five years we compared how much money we put in and what we actually got out.”

The first year saw some savings in fertilizer with almost insignificant yield increase. In year two, the fertilizer savings flattened out, but yields started increasing each year over those in the flat-rate field.

Lenz also finds it fairly easy to do on-farm trials come harvest. “We’ll look at the yields we get on a plot with precision ag versus one using blanket coverage for fertilizer,” he says. “Obviously we can’t conduct trials as accurately as the researchers are doing on small plots, but farmers are learning to be more precise and accurate in our field trials.”

The most obvious outcome he’s seen while evaluating his progress over the last five years is yield, specifically in his malt barley, which has a better stand thanks to VR, making harvest faster and saving wear on equipment.

Soil sampling is probably one of Lenz’s top assessment tools. “Having good soil sampling done is really the foundation of any sort of precision ag, but in particular with VR fertility,” he says. “If you already know what’s there, you can fertilize the upcoming crop appropriately in those zones.”

This knowledge can payoff big and Lenz said his fertilizer bill this spring is going to be significantly down because of his soil samples.

At the end of the day, Aberhart says there are many ways to simplify any farm’s approach into precision ag that have been previously overlooked as complexity clouded the issue. “We don’t have to get it perfect, just do better than yesterday,” he says.