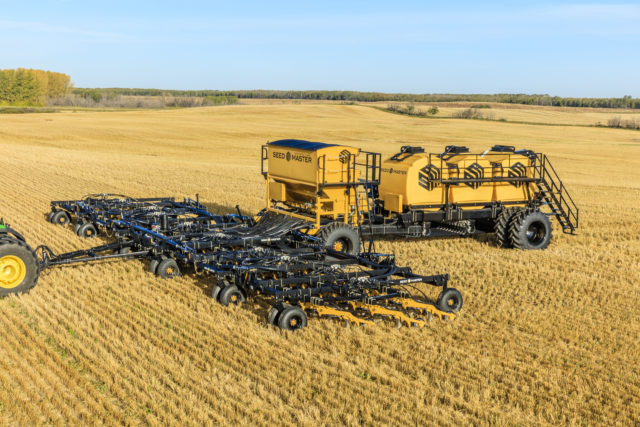 Whoever said “the only constant is change” must have been talking about farming. The industry is constantly evolving, and of late, the advances in seeding technology have been staggering in their speed and scope. Staying current with the latest offerings can be a challenge, but those who keep current are reaping the rewards of greater production and efficiency.

“The focus right now is innovation and automation,” says Trent Nowosad, seeding marketing manager for Case IH. “Whether with tractors, combines or seeding and planting equipment, companies are preparing for the days of more autonomous work down the road. Labour costs, or lack of labour, have been big problems on-farm for decades, and automation is part of the solution.”

As with higher horsepower in the 1970s and 80s or GPS in the early 2000s, industry today continues to work at streamlining technology and enabling farmers to do more with less. For example, in 2019 Case IH introduced the first parallel-link row unit with double-shoot knife opener design. The emphasis was on seed placement accuracy and depth control, especially in uneven terrain and tough no-till conditions.

“The idea is to de-couple operating speed from the job the farmer is doing, so you get uniform seed placement regardless of travel speed,” says Nowosad. “I’ve been farming for over 30 years, and I’ve learned that efficiency equals profit. If you can do the same job at right miles per hour that you used to do at five miles per hour, you’re bound to boost your production without greater effort.”

Do you see what I see?

The recently released Case IH air carts feature variable rate technology and sectional control to further enhance accuracy. They also incorporate an element that is growing in prominence in the seeding business: telematics, which is the integrated use of communications and information technology to transmit, store and receive information from telecommunications devices to remote objects over a network.

“Where you used to glean information via two-way radio from a hired man in the tractor cab, you can now access that knowledge remotely without relying on someone else’s eyes and ears,” says Nowosad. “That is the beauty and the power of telematics.”

The meters are running

Also embracing the push for precision are the latest offerings from SeedMaster. The UltraPro on-frame tank came to market seven years ago, followed in 2017 by the UltraPro II. Both models allow farmers to perform individual row metering.

“Accurate seed placement has been emphasized by the industry since the mid-90s, and is still very much a part of seeding equipment,” says Anthony Biglieni, sales manager and dealer development for SeedMaster. “We felt the next step was to stress precision seed metering to increase yields and decrease input costs.”

Individual row metering allows farmers to adjust aspects of their agronomy, perhaps lowering seeding rates or attaining better seed emergence. As well, on-board metering reduces the distance seed travels by about two-thirds over bulk metering systems, so it’s gentler on the seed and eliminates bunching, leading to even seed placement within the row itself.

“There has been a move out West to consider planter-type seeding tools for canola or soybeans,” says Biglieni. “These tools do a great job in seed metering, but you have to apply nutrients or fertilizer in a separate pass. For western Canadian farmers, individual row metering on a double-shoot precision air drill matters because it allows them to put seed and nutrients down in one pass, saving time, effort, labour and fuel costs.”

Last year, SeedMaster revealed a prototype of the Ultra SR, billed as the first single-rank, knife-opening drill designed for large-acre farming. It uses an innovative trash wheel to keep trash from bunching up and plugging the drill, and the single-rank design makes it easier to follow dips and undulations in the field.

Once again, precision is the watchword. At the same time, simplicity is another priority for farmers and industry going forward.

“The next enhancements I foresee will be based around making technology easier for the operator to manage,” says Nowosad. “Whether you’re dealing with younger, less experienced staff or you’re a middle-aged son working with an older parent, there is a need to make equipment simpler to use for young and old alike.”

By stressing, simple, efficient design and intuitive equipment, companies can streamline the introduction of new technology while fostering more worker satisfaction and greater ease of uptake.

“The easier technology is to use, the easier it is to adopt,” says Nowosad. “Everything has a learning curve, but if we can make it less complicated to learn, set up and operate equipment, we facilitate teaching and spreading knowledge across the workforce. As an owner and manager, that makes your job straightforward and your operation more efficient.”

The wizard of awes

Whether it’s changing the settings on a monitor or running calibration on equipment, cutting-edge systems use “wizards” to walk staff through the process step-by-step. The reductions in time and labour required to get workers up to speed each year can mean significant cost savings for farmers, something that may be more vital today than ever before.

“The last 10 years have seen some of the best cash flow periods in agriculture in Canada,” says Nowosad. “The problem is that nothing lasts forever. Especially in Saskatchewan and Alberta, we’ve seen a dramatic increase in farm size since 2008, so there’s fewer people farming more acres. Where the economy maybe allowed us to be less efficient than we could have been, as times tighten up, growers need to maximize the productivity of every acre.”

As they seek ways to generate more returns in challenging times, farmers are turning increasingly to technology for answers.

“A lot of times, increased productivity comes not only from doing our best with the best acres, but from getting all we can from those more challenging spots,” says Nowosad. “Independent depth adjustment openers, for instance, have allowed growers to be stronger agronomically across the farm, getting more done per day with the same labour or doing the same amount of work with less labour. There are many such challenges that equipment can help address.”

Fortunately for agriculture, and those that benefit from it, doing more with less and committing to continuous improvement just seem to come naturally for farmers.

“I love that ‘never content’ ideology that farmers possess,” says Biglieni. “I haven’t seen one farm where they’re not trying to improve on what they did last year, and that effort begins with seeding equipment. If you don’t knock it out of the park when you seed, you have to play catch up with everything else, from spraying to combining.”

When people approach Biglieni at crop production shows, they always want to know how they can get another 10 per cent from their operation this year and take it to the next level. His role in helping them succeed is what gets him up each morning, even on those chilly Prairie days.

“Our customers are always striving to be better, and if we can support them in that with the latest and greatest technology, we’ve done our job.”