Home Insurance To Hail and Back 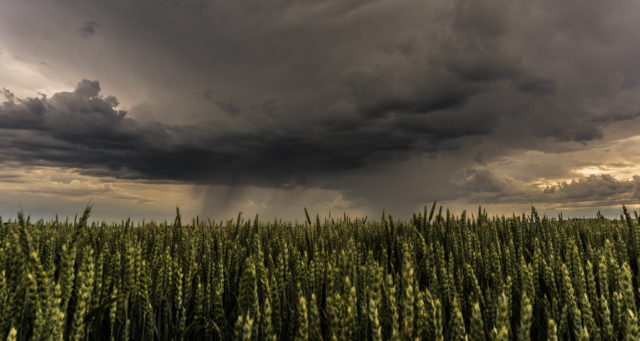 Naming the worst weather hazard for farmers is like picking out the biggest geek at a comic book convention: there’s no wrong answer. Still, hail damage to your crops can be devastating. Like much of farming, it begins and ends with risk management, and understanding the complexities of hail insurance is a good place to start.

“When early settlers came to Alberta in the 1900s, they soon realized that hail was a big risk to their operations,” says Jackie Sanden, product coordinator for Agriculture Financial Services Corporation (AFSC) in Rocky View, Alta.

As they celebrate their 80th anniversary, AFSC sees no signs that the hail threat is decreasing.

“Hail damage to crops is one of the top five risks for producers who farm in Alberta,” says Sanden. “Over half of the hail in Canada falls in Alberta, so it’s a real concern here.”

That reality may explain why 13 million acres of farmland in Alberta have one of two forms of hail insurance through AFSC. One option is straight hail coverage, where someone buys insurance strictly for hail damage to their crops. There is also a hail endorsement, which is a rider that can be added to a farmer’s crop insurance policy.

Yet, just because the insurance is out there doesn’t mean it’s completely understood; it’s still insurance, after all. Wading through language and procedure can help determine what it’s all about and what to expect when you take the plunge.

“Each year, AFSC sets premium rates for each township in Alberta for each crop type we insure, whether it be pulses, cereals or oilseeds,” says Sanden. “The actuarial science is like with any other insurance product and is based on two things: history and vulnerability.”

Specifically, the insurer considers how often and how much they have paid out in the past for a certain crop in an area. Since crops like peas and canola tend to damage more easily and cause higher losses than a cereal such as barley or wheat, premiums are set accordingly.

“We try and ensure that over the long-term, we are collecting enough premiums to cover all the losses we will need to pay. Every so often, we have a year with more payouts than usual, but we are backstopped by the provincial government and have re-insurance to cover our losses, so producers never need worry that we can’t pay a claim.”

When it comes time to pay that claim, the process is an interesting blend of math, science and the human eye.

“Once a client reports damage, our inspectors attend the farm to view the damaged crops,” says Sanden. “They perform crop counts in several areas of the field, look at the growth stage of plants and then make conclusions. If plants are at a young crop stage without much plant matter, we consider defoliation and what branches or leaves are damaged. For mid-stage crops, we look at stem damage and whether the plant can still recover and produce a head or pod. Finally, if a plant is mature, we examine pod loss and how many seeds are damaged.”

Based on their observations and counts, inspectors calculate a per cent loss and apply that to a dollar amount, trying to determine what yield loss will result from the hail damage in question. For example, if a farmer has $2,000 in coverage and 32 per cent loss, they would receive $660 in payment on their claim.

“It’s quite common to see a range of damage to a field. Depending on the size of the field, we have a minimum number of plant counts that inspectors need to do. If you have 100 acres, they will do eight counts in different spots. Should the numbers vary, we just split the acres, so you might have 20 per cent damage to 40 acres in this corner and 30 per cent damage on the 20 acres next door to it,” says Sanden.

Though the procedures around premiums and claims are well-established, they are also designed to evolve with the industry.

“As producers change how they manage crops, what types they grow and their production capacity, the amount of insurance they can purchase, and which crops are covered has increased, as well. In my 15 years at AFSC we have added 20 crops to our insurable list. Sometimes a producer will ask us to insure a new crop they’re trying, or we’ll hear about something new at an industry event. If we can determine how to do plant counts and assess damage for that crop, we will look at covering it for hail damage.”

One province over, Saskatchewan also deals with hail issues using an approach that both differs from Alberta and shares some common threads.

“SCIC offers yield-loss insurance, which provides coverage against all natural causes of loss,” says Shawn Jaques, president and CEO of the Saskatchewan Crop Insurance Corporation (SCIC). “That can include everything from hail, dry conditions or too much moisture, to frost or insects.”

In 2017, SCIC insured 28.3 million acres, which represents about 75 per cent of seeded acres in the province. While every farm is different, the standard approach is for farmers to choose which crop to cover and at what coverage level, as SCIC has several options available.

Like Alberta, SCIC sets premiums based on historical losses in the area, previous payouts and coverage levels. Over all crop types and coverage levels, the average premium in 2018 through SCIC was $8.41 per acre. Once premiums are paid and a loss occurs, the wheels of the claim process are set in motion.

“When a producer incurs a loss on their farm from a natural weather event, they assess those acres and determine if they will put the crop to another use prior to harvest or wait until harvest is completed and make a claim,” says Jaques. “If they feel they are in a loss situation, they contact their local crop insurance office; register a claim and have an adjuster assess the damage on-farm. The adjuster then determines the actual loss of production, which will vary depending on the time of year. Most claims are registered after harvest, once the producer has completed harvest of all their acres. We measure the farm’s production, consider what is sold or fed to livestock, calculate total production for that crop year and compare it to the coverage level; then, if there’s a loss, we pay the difference.”

If the inspection is being done prior to harvest, which occurs when a farmer decides to put all or some of their acres to an alternate use following a loss, adjusters determine the yield for the acres not harvested.

SCIC also pays for quality, such as guaranteeing No. 1 canola even if it’s downgraded to No.2. In that case, an adjustment factor is applied to compensate for loss of quality.

Though the hail insurance process is thought by some to be shrouded in mystery, Sanden takes issue with that.

“Our inspectors have manuals that literally tell them how many plants to look at, how to count head loss and how broken leaves will affect yield,” says Sanden. “There is observation involved, but there is definitely math and science behind what we do. For producers unfamiliar with how it all works, we encourage them to attend the inspection so they know what we’re doing and how we’re arriving at the final numbers. We also have a calculator on our website, so when producers are up at 10 p.m. wanting to get an exact quote, they can do that.”

Of course, when you’re dealing with weather, some things will always be hard to predict, but if anyone chooses a farming career for its certainty, they’d best have a plan B.