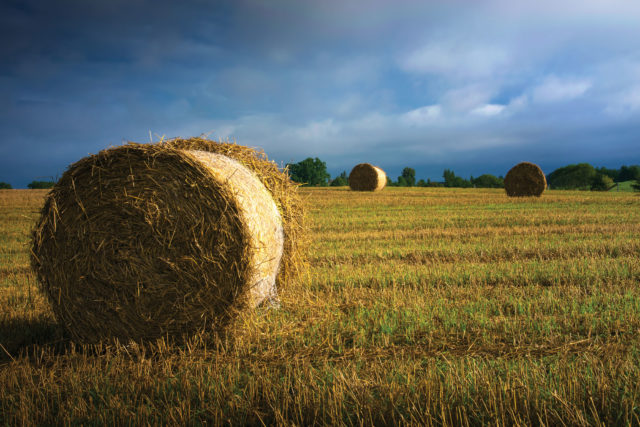 Rob Blackwell has been making hay near Cochrane, Alta., for 40 years.

“When we moved into the foothills here, we were limited as to what we could grow and we found, at that point, there was a good hay market we could get into domestically,” he says. “Not only is the price, normally, very good, but there is a high demand, so we can sell anything and everything, pretty much.”

In more recent years, most of Blackwell’s hay has gone to Japan, where cattle and beef producers have historically paid more for hay than domestic buyers. But with dry conditions pushing demand up across the Prairies, Blackwell says domestic and foreign hay prices are now hovering on the same plane.

“This year in particular, it’s levelled,” he says. “Just because there is such a high demand locally for hay. In normal years, I think the export market is slightly better than the local market.”

One province over, Tamara Carter says she’s seen hay sell for as much as $220 a metric tonne this winter.

“Certainly, drought affected most of the forage in Saskatchewan. So, in terms of volume changing hands, there was less hay to sell,” says the president of the Saskatchewan Forage Council.

The result has been higher prices and more demand.

As to whether or not higher prices are pushing farmers to view hay as a cash crop, Carter doesn’t want to hazard a guess. But she notes more and more people are calling the non-profit organization looking for information on hay marketing and production.

Demand for hay also appears to have increased in Manitoba.

Kevin Duddridge feeds about 230 beef cattle near Steinbach, but also factors hay sales into his larger farm business plan. For years, he’s planned ahead to meet the needs of longtime, local clients, but recently he’s seen demand for hay expand to new demographics.

“I’ve been getting calls from people I’ve never heard of before. Calls from all over the place, far and wide, looking for hay,” he says.

However, he doesn’t believe current demand for hay will draw a significant number of new farmers into hay production – particularly in Manitoba, where the beef cattle herd is still half of what it was prior to BSE. Then there’s the economics of production.

One producer who can attest to the increased production costs is Mike de Kok, but he won’t be changing his program any time soon.

He farms 5,000 acres of forages east of Fort Macleod in southern Alberta. The primary production is dedicated to alfalfa and timothy.

Despite optimal growing conditions, de Kok’s costs have increased 15 to 20 per cent in the last five years. However, he isn’t changing his program.

“It makes sense compared to grain right now because prices aren’t the greatest on that end,” he says. “The main thing with forages is that it’s your own marketing. Alfalfa … you kind of have more say on when you are going to get paid and how much you want. With grain, it’s ‘how much will you give me?’”

The majority of his acres are under irrigation which pushes his alfalfa costs per acre to about $400 while the timothy runs anywhere from $250 to $300, when factoring in fertilizer and water. Seed is a minimal cost that occurs approximately every five years.

For de Kok, his alfalfa is generally sold off to Alberta and B.C. dairies at prices anywhere from $240 to $300 per tonne. The timothy is sold to a Lethbridge-based buyer between $350 to $425 and is exported to Japan for dairies and its domestic pet-food market.

While the inputs may seem uneconomical, his yields end up around five-and-a-half to seven tonnes per acre. On top of that, he is netting around $1,400 per acre. Factor in his alfalfa is cut three times and the timothy twice, it’s easy to see why he believes it to be a cash crop.

“As long as we can get the higher quality for dairies, it’s been very good for us in the past,” says de Kok, 33. “We’re in a very windy, hot area in the summer, so it’s good for drying down the alfalfa to bale it and it’s really good quality.”

The long-term plan is still to focus on forages, as well, according to de Kok. With new, greater yielding varieties becoming available to farmers, the farm will be forage-driven into the foreseeable future.

“It’s a little bit more labour-intensive farming than grain because our summers are busy,” he says. “We are doing three cuts of alfalfa. On that end, it’s a little more work than say doing your cereal crops, but it has paid for us in the past and we’ll continue in hay.”

One demographic not shying away from high-quality, high-cost hay is horse owners.

“It seems like everyone around here has a horse except me,” says Blackwell. “There are so many acreages around here with people with horses for their kids, or pleasure riders, so the demand for hay is huge.”

Duddridge notes many people view horses as pets, not livestock, and are willing to pay a premium for the highest-quality hay they can find.

“We grow more each year for our horse customers, because horses have to have hay and our horse farmers are more quality sensitive and less price sensitive,” he says. “So, what I mean is they are prepared to pay for the quality. They get the second cut and they get the best hay.”

Since Alberta’s beef herd has seen significant recovery over the last decade, the factors pushing hay prices upwards may also be tied to management practices among ranchers, according to Blackwell.

“There is a lot more cattle and it’s used back in the country now,” he says. “And even the cattle guys, in particular, seem to be focused less on producing hay and more on managing their cattle herds. And you know, you can only do so many quality things at once, so that’s where I’m leaning there.”

But it’s unlikely many producers will begin viewing hay as a staple cash crop, he adds.

“When the export market first came to play in our area … we all thought, well we can be a hay farmer,” says Blackwell. “But so many farmers found it such a risk to produce a crop … that they gave up trying to do it and they went back to grain.”

Even if producers are interested in increasing their hay production with the goal of selling more hay, they’re at the mercy of the weather.

If 2019 is another dry year, prices will continue to climb, although how high remains to be seen.