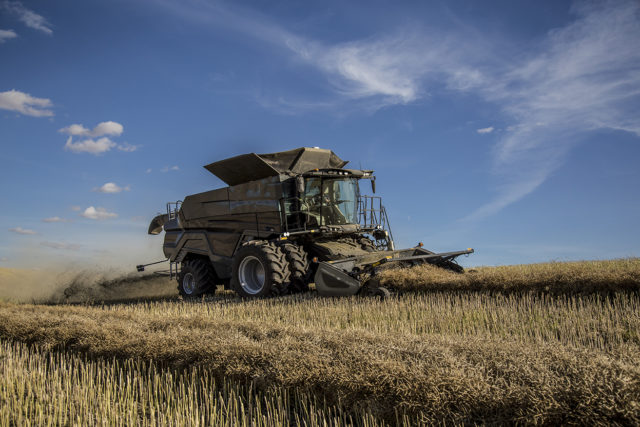 Since the first harvester was invented (a reaper machine designed in Scotland in the early 1800s), harvest technology has seen much change. The basic principle, however, remains the same: chaff is separated from grain. What, then, makes new harvest technology so unique? Farming for Tomorrow takes a closer look at two harvesters – the LEXION 700 series by CLAAS and AGCO’s Ideal combine – highlighting features that the manufacturers believe make these machines stand out.

The Ideal combine by AGCO

Since its initial launch at Agritechnica 2017 in Hanover, Germany, the Ideal combine has attracted a lot of attention. Caleb Schleder, tactical marketing manager of harvesting at AGCO Corporation, says that’s because they did something that not a lot of companies have had the opportunity to do: design a combine from scratch.

Design plans began back in 2011 when AGCO interviewed customers around the world, including in Western Canada, and asked them key questions on the different aspects of harvest. They wanted to know things such as what capacity level was needed and what would make that farmer’s life easier when it came to setting the machine.

“It was a great exercise,” says Schleder. “We got a lot of insight from some really professional producers in order to understand how we start from the ground up building a combine that our customers need.”

One might think that conditions vary too widely around the world to design a machine that meets the needs of a wider market, but Schleder says that isn’t true. “Overall, there’s a lot of variability in the conditions,” he notes, pointing to shatterproof canola versus traditional canola and strip cut versus swath. “But when it comes down to the needs, it needs to gather, feed, thresh and separate, clean and handle the grain, and then provide good residue management. How it does that is important and how it manages the different conditions is extremely important.”

One of the most important features of the Ideal combine is Ideal Harvest, says Schleder. Ideal Harvest is a feature on the combine that’s designed to give more information to the operator than ever before. Schleder refers to it as “visualization of the machine.”

The kill stall process involves stalling the combine in operation while it is fully loaded. “And then you get out and you look at the loss on the ground, you look at the shoe distribution to make sure you’re not overloading the right side or the left side, and really understanding how that rotor is being presented with crop and how it’s threshing and separating it.”

Ideal Harvest, however, allows the operator to visualize the internal processes of the combine, showing them how it’s threshing, where in the rotor the grain is coming out and how it’s dropping down to the shoe. On top of that, it also shows losses at a higher quality than what was done in the past.

“We have a full suite of sensors running through that machine, telling us exactly what the combine is doing at all times,” says Schleder. “That’s something that’s important to any operator whether they’re a novice operator or an expert operator because now that you get that inside picture, you truly get to see what is going on in your machine, and we didn’t have that opportunity prior.”

Another question AGCO asked farmers was what they could do to make the grain-handling process more efficient. “It doesn’t matter how quickly you can get the crop into the combine,” he says. “What matters is how quickly you can keep it away from the machine and keep that combine running at all times.”

The streamer system on the Ideal combine, with its 485-bushel grain tank and hydraulic adjustment of the discharge rate (with an unload rate of up to six bushels per second), accomplishes just that by allowing producers to stay in the field longer. Unloading on the go has become more important, especially with higher yields, says Schleder, pointing out that the Ideal combine is able to unload 32 per cent faster than its nearest competitor.

Western Canadian farmers who look to harvest at a larger capacity will also be attracted to the Ideal combine’s dual helix rotors, says Schleder. In order to handle the harvest with as much care as possible, and to ensure a constant load on the rotor, the intake augers, threshing bars and rotor fingers are arranged in a spiral around the rotor. As a result, all grain is cleanly separated without impacting straw quality. This is due in part to the length of the rotor. At 4.84 metres and 600 millimetres in diameter, it is the longest rotor on the market today.

Those that are more compaction conscious will be attracted to Ideal combine’s track system. “Typically you would see more compaction worries in the early spring,” he says. “But as we start to see that window narrow, there’s opportunity for us to get out into the fields when conditions aren’t perfect.

“For us, to have that track with that large footprint – it’s got 11 feet of footprint that we’re placing down on that soil – we’re able to expand our gross flat plate,” he continues.

The result is fewer pounds per square inch on the soil, which effectively reduces compaction.

There are many draws to a combine like Ideal, but perhaps the most important is that the entire concept was designed from scratch with the farmer in mind. “By giving us a clean sheet of design, we were able to take all those needs at once and essentially build a machine that addressed a lot of them,” Schleder concludes.

The LEXION 700 series combine by CLAAS

In Western Canada, certain crops – canola, for instance – often require low threshing, but higher speed separation. On most combines, adjusting for the two speeds is simply not possible. On a LEXION, however, independent adjustment is possible, making it one of the more unique combines on the market.

“The LEXION has an independent or separate threshing system from the separation system, so we have two systems that have to be adjusted versus the single system that threshes and separates on all the other combines in the industry,” explains Jeff Gray, product coordinator of LEXION CLAAS Omaha Inc. “Being able to adjust your separation speed and your threshing speed independently provides the operator with greater flexibility to adapt to changing conditions more efficiently.”

“Whereas on a LEXION, the operator can adjust those two systems independently, so there’s no compromise,” explains Gray. “While it is an extra adjustment that you have to make, it’s one that highly benefits the productivity and efficiency of the combine.”

On other machines, in order to get the separation speed to handle large volumes of dry matter, it also creates more overburden because the threshing speed has to be operated much faster in order to achieve better separation.

“What happens then to get more separation, they’re over-threshing the heck out of the dry stems,” notes Gray. “They may not be damaging the crop so much, but they’re creating an awful lot more chaff in the combine that causes a lot of overburden on the cleaning shoe.”

“And that’s one of the advantages of the LEXION,” he continues. “We don’t have to over-thresh in order to get the crop residue through the machine.”

Gray says the LEXION 700 will also be an attractive option to those operating in the emerging soybean market. Soybeans produced for seed are oftentimes harvested at a slightly higher moisture content to protect the quality of the bean. On the LEXION, says Gray, operators can maintain gentle threshing action, optimize speed, and adjust rotor speed and separation speed independently to preserve the quality of the sample in the tank and minimize grain loss. On other combines, each adjustment impacts the entire operation, leading to further issues, such as cracked grain samples or greater grain loss.

In essence, CLAAS is the only company that has an independent hybrid processor with cylinder threshing and rotary separation, according to Gray. He says the design not only gives greater flexibility to fine-tune the two systems independently, but it also provides a much larger area for threshing and separation, which leads to increased capacity.

“It makes the combine bigger, and we might have a little bit longer turning radius,” he says. “But the advantage is we’re keeping a whole lot more grain in that combine than what our competitors are.”

CLAAS was first to launch CEMOS or the CLAAS electronic machine optimisation system, which is the automatic adjustment system for the combine. That enables the machine to make adjustments automatically, on the fly, as needed when the combine is harvesting. “That makes drivers into operators,” says Gray. “And makes them more efficient and productive.”

That system has been in place for the last five years. Since then, other companies are following suit, coming out with their own versions of automatic adjustment. “That’s something we’re quite proud about,” says Gray. “That’s the emerging technology in the industry right now.

“We’ve had auto steering for several years now,” he continues. “Now it’s time to let the combine start making all of the adjustments on its own with threshing, separation and cleaning.”

Ultimately, operators will know best which features are most attractive whether it be less compaction and more capacity or the ability to independently adjust threshing and separation speeds. One thing’s for certain: machinery companies are certainly paying more attention to the individual needs of farmers and operators.