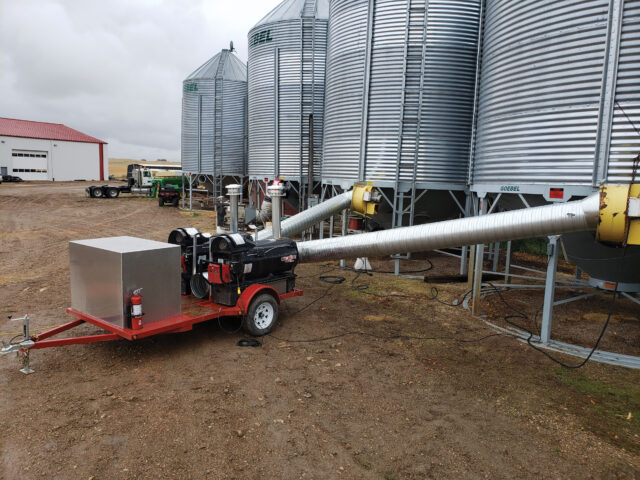 Last winter, many Prairie farmers lay awake at night worried about the condition of crops left under snow in their fields after 2019’s “harvest from hell.” Others slept well despite conditions that devastated thousands between the Peace Region and Manitoba, for they had the means to dry the grain on their farm, starting and ending harvest successfully on their own schedule, rather than Mother Nature’s.

“The last few years there’s been quite an increase in demand for dryers on the farm as fall comes later each year,” says Wentworth Ag’s dryer sales and service provider Jayde Klassen, based in Winkler, Man. “They’ve also tended to be wetter, so the dryer is now essentially replacing that second or third combine. That combine can’t dry the wet grain for you. If you want to keep up, you’re going to need that dryer.”

Raymond Sloan agrees. The Flaman Agriculture equipment salesman specializes in grain dryers and handling equipment in Nisku, Alta. “I’ve seen the benefit now in adding the grain dryer to the equipment portfolio,” he says. “An extra combine doesn’t help when the weather’s tough and it’s sitting in the shed.”

The dryer improves farmers’ control over the harvest timeframe. They can enter the field sooner, collecting, harvesting and preserving grain at its best quality. “You can always dry the grain down, but you can’t always bring back the quality,” says Sloan. “This is where a grain dryer shines on any particular farm.”

Getting grain in the bin removes the worry of the unknown. “When you leave a crop out over winter, you don’t know what you’re getting when you go at it in the springtime,” says Sloan. “We had a late spring this year and the moisture kept coming. People had to try and get the crop off that they left out, plus get into spring seeding when we were already 10 to 15 days late.”

Considering the current landscape of many operations where equipment is often financed or leased, payments are inevitable, says Sloan.

Another draw has been the technological advancement in grain dryers over the years, such as better wiring, computer operating systems and remote monitoring. Many older models had an auto-fill feature where they could only keep filling the dryer. That’s been replaced with a full programmable logic controller and with top and bottom moisture and temperature sensors that allow for auto-drying. “It will speed up and slow down the dryer in order to hit your target moisture for each grain type,” says Sloan. “It has a remote-net package available with it that is linked to a website the farmer can go on with their smartphone, tablet or laptop.”

Farmers click into the secure website to see what’s happening with their dryer in real time, bringing peace of mind and freeing up time. “You can monitor it from any remote location—in the combine, the grain cart or the beach in Mexico, anywhere with access to a data plan or internet,” says Sloan.

An alarm code notification sends alerts through email or text message, while an automated shutdown prevents over-drying or damage to the machine. As transparency and traceability are increasingly important, today’s dryers can map the grain coming through. The record of what’s drying, moisture, temperature and bushel amount can be sent to the elevator ahead of time. It’s also handy for farms that custom dry grain for neighbours. “They can show the neighbour all of this logged information and accurately assess what needs to be charged,” says Sloan.

Other advanced options include small grains kits to prevent canola loss through exhaust ports and variable frequency drives that speed up and slow the blowers to match the airflow required for each crop’s optimal drying. Mixed flow dryers are replacing screen dryers for more even access to the warm drying air and less moving components mean less maintenance. While there can be more economical options at purchase time, some can have a higher running cost and require more energy.

Power and fuel sources are also key differentiators in the dryer game. Klassen says one of the biggest ways to see money invested into a dryer returned is to ensure the system is set up properly with the best power source available. “Three-phase power over a single-phase system is one way to get that return,” he says. “Cleaner power sources are also able to run later on in the year without being hard on equipment.”

Considering the fuel source can also cut costs, such as using natural gas over propane in the long-term. However, getting natural gas into the yard can be costly depending on the farm’s location.

Saskatchewan and Manitoba farmers do not have the rebate opportunities of Alberta farmers thanks to the province’s Efficient Grain Dryer Program. “This can help offset the cost of upgrading an older dryer to these newer options,” says Sloan. “Or when purchasing a new dryer, you can get a portion of the option costs back as well.”

Once a farmer makes a dryer inquiry call, planning starts with a farm visit. Existing equipment, bin-handling capacity and farm acreage all factor in. In light of recent challenges, farmers might overestimate the amount of grain drying capacity they actually need.

“Yes, we’re in this wet weather cycle right now and it sucks trying to stay ahead of the combines, but there are going to be dryer years coming,” says Sloan. “Don’t buy a dryer to dry 95 per cent of your crop right now. We use a 70/30 rule. Buy a dryer that will work well for about 70 per cent of your crop size. Then, in the years where you only need to dry 40 per cent, you don’t have this massive dryer with high financing put into the system that might not be used as much.”

Timeline is also important. “Give yourself at least five months ahead of time to think about where you’re putting it, get the best power source you can and get onto the build list early in the year to be sure everything is ready to go when you need it,” says Klassen.

As with any investment, the farm’s long-term goals are paramount.

“Some of the original Vertecs are 40 years old and still running,” says Sloan. “I can set dryers up where we run simply for a couple years with one wet and dry bin and a couple simple utility augers. But we’ll make sure to put that concrete pad in a position for the future capability to add extra bins and [other upgrades].”

While purchasing and setting up the right grain drying system for any given farm can carry a steep price tag depending on the complexity of the system, Sloan sees paybacks time and again.

Last year, certain elevators even paid farmers a premium to over-dry their own grain. “This made it easier for them to mix off and blend with other farmers’ where they didn’t have dryers,” says Sloan. “Most of them said the math worked out and they made more money in the end by over-drying and taking these premium paid contracts to help the elevator. It was a win-win situation.”

Finally, times have changed. “There was an old adage that dryers just cost money,” says Sloan. “That’s just not true anymore. There is an input cost to running the dryer, but the return on that investment is a big number at the end of it. If you take the lesser quality in the grain and ship it to the elevator, you make less money. As long as the input cost is covered in the returns, you’re still making money.”