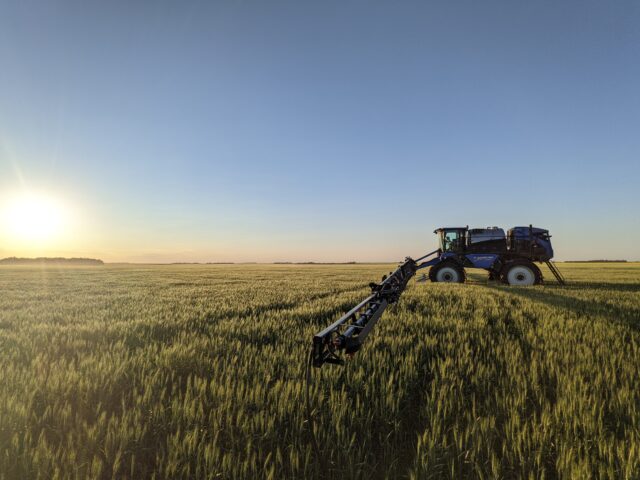 When times are tough, the first thing most people do is try to find a solution to whatever the problem may be. In farming, tough times are typically translated into a loss of revenue from the previous year with the solution being a reduction of farm inputs for the year ahead.

At the current inflation rate of the price of fertilizer, and with no sign of the cost rescinding anytime soon, some may look at the way they dress the crop and as most call it, “sharpening their pencils,” to where they can cut back a bit.

The increase in cost is being attributed to supply and demand along with geopolitical volatility and the fact that production hasn’t stopped, but the amount in storage has greatly dwindled.

New Norway, Alta., farmer and agronomist Scott Keller can think back to times when he’s done both the cutback and the over-application. Both results surprised him.

“I’ve seen a crop like our malt barley where we’ve been way too light on nitrogen, because we’re worried about protein,” says Keller. “The maltster that primarily sells to craft brewers doesn’t want protein over 11.5. So, we have to be cognizant of that where we’re under fertilizing our malt barley by at least 10 per cent. Last year was a good indication where we saw [the maltsters] cut our contracts back just before spring because of what happened with the stadiums being closed because of the pandemic, and so there was low, low demand for malt. And I mean, you already had your fertilizer bought, and you had this land slated to go into barley … sure you could have put it into another crop, but you’re going, ‘well I’ll be growing it for feed, I guess.” Keller upped his nitrogen rates by 10 to 15 per cent and had an above average rainfall last year. He says it was some of his best barley in his farming career.

Keller says his protein was still on the low side for that crop, so his initial reaction was a bit of shock as he thought the opposite would happen.

On the other hand, he’s also over-applied in the spring due to having the goal every farmer has with gaining a higher yield.

“You’re always blown away by what a good year can do and you get higher than what you’d expect for yields and you go well, ‘how the heck did I grow that crop?’ As you want to keep increasing your yield goals, you get to a point where you’ve put too much nitrogen on in the spring and it just causes you to grow straw and you deal with lodging and things like that.”

With more than 10 years in a variable rate zone management plan, Keller recommends others to follow suit as now they’re just having to maintain soil. Though it’s easier said than done, he went on to say they’re at a point where they can maximize crop production so it’s worth the extra calculations.

When you interview any agronomist, their first answer to almost any and every question is that you should start with a soil test to understand what kind of earth you’re dealing with. For Guy Keeler, the saying holds true when it comes to a farmer thinking about cutting back on their fertilizer application for the year.

Keeler, a field scout and soil crop fertility planner with Western Ag for Northwest Saskatchewan explained that a simple soil test is the starting point for or determining what your optimum applied fertility should be.

If a producer was looking to hold back on fertilizer, he put it simply: their yields would likely drop.

Having more than 20 years in the agronomy business, Keeler says he had mixed reviews when it comes to people withholding the crop nutrient just to save a little in their pocketbook.

“I think [there’s] rising costs, but there’s also rising prices out there and the decision on the level of fertility … I think the big picture is that the price that you’re getting, and the anticipated yields, along with the costs all need to be considered,” explains Keeler.

The risk factor being if you hold off for one year, you might end up having to pay even more for the loss in nutrients for the years to come. The risk, Keeler says, just isn’t worth it in the long run.

“When [farmers] make a decision to put down a certain amount of fertilizer, they make a decision to go with any other crop inputs, or buy equipment or buy land – all of the risks are kind of out on the table and considered along with the potential payoffs,” he says.

“So, I think when it comes to sharpening pencils, it’s about getting those decisions right and about every decision that’s made should be weighed, kind of in a cost–benefit, risk perspective and decide accordingly.”

As mentioned, with any farm decision made, there’s a level of risk that farmers take on a daily basis. Keeler says, in hindsight, there will be times where a person wished they didn’t hold off or should have applied more, but with Mother Nature being one of the biggest factors to how the crop grows, farmers can’t know what their outcome would be until they take that initial risk.

He notes in certain circumstances, backing off on fertilizer may not give you a penalty when it comes to yield; however, it’s likely to do with the type of soil conditions a farmer has as compared to the application of fertilizer itself.

Keeler says only once the tests are complete, farmers can truly design their crop durability or optimize fertility around whatever the soil results bring up. Though there’s no silver bullet guideline on how this will look as soil types vary per region.

“Even from an environmental perspective, a well-fed crop does a lot for the soil,” he explains, going on to say from a practical business standpoint, there is no ‘wiggle room’ when it comes to withholding a little or all fertilizer just to save a buck.

Benefits of Environmentally-Smart Nitrogen Come at a Price