“If you love something set it free. If it comes back it’s yours. If not, it was never meant to be.” – Unknown

For Cherilyn Jolly-Nagel, it wasn’t so much that she wanted to set farming free, it was that she wanted to be set free from farming. Or so she thought. The Mossbank, Sask., farm kid was determined at a young age to leave country roads in the dust as soon as she could find the pavement. Farming for Jolly-Nagel was something she was simply born into and not a life she sought after. However, it would take leaving her home province and gaining new experiences while exploring the world before it clicked that farm life held a deeper value than she once realized.

The summer of 1997 was filled with nervous excitement for Jolly-Nagel, a fresh high school graduate that was eagerly awaiting her hospitality and tourism marketing diploma program to begin at Medicine Hat College in Alberta. For the exuberant 18-year-old, she was finally following her dreams.

“I had that travel bug and that was going to be part of my life, traveling and experiencing other cultures,” she says. “If there was one thing I knew for sure it was that I wasn’t going to be a farmer.”

The next two years blew by as Jolly-Nagel happily devoured class after class. With parchment in hand, she began to search job postings to match her globetrotting education. Well, good things come to those who wait, or won’t take ‘no’ for an answer. A Latin dance instructor position with Club Med—Jolly-Nagel’s “dream job”—was available in Providenciales, a bustling town in the British Overseas Territory of the Turks and Caicos Islands. Rarely pleased with not achieving her goals, Jolly-Nagel did all she could to get the job, including lie about her age and experience. “I don’t regret that for one second,” she says. “I was determined to get that job.”

Jolly-Nagel successfully landed the job. She spent six months in the latter half of 1999 teaching dance all day to patrons from around the world before dancing more in the evening and carousing with visitors enchanted by the sights and sounds of the Caribbean. It didn’t matter either that she couldn’t converse with many others, after all, movement transcends language. “We had music and rhythm and that was it.”

However, it was during select moments of downtime when she would engage with vacationers that they would inquire about her life and where she was from. Without fail, guests would be enthralled to learn Jolly-Nagel was from a farm with a nearby town replete with a stereotypical Main Street. Jolly-Nagel made sure to pack a photo album with her and it was well-worn by the time she came home.

“They were so much more familiar with an urban environment and different careers and had so little connection to a farm,” says Jolly-Nagel. “I found quite early on that with my background and childhood; I was a rock star. I had all these ‘cool’ stories about growing food. I had got an appreciation for what I had by going somewhere else. I didn’t realize I had something as cool as farming as a background.”

A few of those pictures in her album were of David, her high school sweetheart back home in Mossbank. As Jolly-Nagel’s contract term was close to expiring, she quickly found herself at a crossroads. Sign on for another sojourn at one of Club Med’s many locations or head back to David, who by that time was farming his own land and working for Jolly-Nagel’s parents Paula and Warren. She came home without a plan or direction so, she went and talked with the most trusted people she knew, her parents. They promptly directed her to Alanna Koch, a prominent figure in Saskatchewan agriculture and provincial politics.

“Of all things, she suggested I go to school for agriculture,” says Jolly-Nagel with a laugh. “In hindsight that should have already occurred to me, but I did not think I could learn to love farming.”

In short order, Jolly-Nagel had her eyes opened to many exciting classes through Olds College’s agricultural business diploma, including policy. For Jolly-Nagel, her penchant to never take no for an answer found a welcome home through lively debate about real life issues that affected everyday people such as her parents. The class would help kick off a successful calling in policy throughout her adult life.

With another diploma on the wall, Jolly-Nagel found herself back in Mossbank with a renewed appreciation and respect for agriculture. In short order, she became the town’s first economic development officer, married David and continued to farm with David and his parents Lloyd and Marjorie. They also began handled operations at the family’s outfitting venture, Hunter’s Paradise.

The hunting lodge primarily offered ducks and snow geese. It was a hit with blue collar Americans who ventured north for a rural getaway.

“Every dollar we had went back into building the land base and infrastructure for the farm,” says Jolly-Nagel.

The Nagel family expanded their land base for many years and they now crop 15,000 acres or more each year. The family has also added in David’s brother Mike and his wife Natalie in 2005. A few years later, the Great Financial Crisis broke out and rocked worldwide markets, including North America, the epicentre of calamity. It naturally forced the outfitting business to wind itself up, but also allowed everyone to focus solely on farming.

The couple has tried their hand at just about everything over the years—spring wheat, durum, barley, flax and mustard, although, “once canola hit the scene and we weren’t getting the genetics and yield potential from mustard, we moved to canola we didn’t go back,” she says, adding that this year they are growing large green lentils, canola and durum.

With pulses in the mix since the early 2000s, the family has been pleased with the performance of chickpeas and lentils. Their somewhat sandy soil and lack of flex headers made harvest a challenge at harvest time, but as the years rolled on, so did the technology, and it became increasingly profitable to grow pulses, specifically lentils.

“Our land is fairly conducive to grow lentils and pulse crops,” she says. “We have a good rotation with cereal, oilseed and a pulse, makes for good cycle. We had to learn about nitrogen fixation. We’ve learned so much about how good it is to have all these crops working together for soil health.”

Jolly-Nagel says the industrywide push towards data analytics does not get them excited because margins are too tight and Excel spreadsheets work just fine to track their data and the cost—free—is a better deal.

“When you look at the budget, we’d rather put it into seed technology, new chemistries or fertilizer,” she says. “The data piece is simply too unreliable.”

In addition to agronomy, Jolly-Nagel is keenly interested in issues surrounding trade, market access and transportation thanks to a chance meeting. Early in 2002, the Western Canadian Wheat Growers Association prepared to close up shop due to dwindling membership and finances. Jolly-Nagel attended a session on behalf of her father who was unable to attend. She went to simply listen in, take notes and be done with it. However, she could not help but be moved after having conversations with certain members after the meeting. Jolly-Nagel realized this policy-driven organization had talented minds and was well-known in the Prairies.

“The philosophy around the Wheat Growers appealed to me: ‘Let the farmer decide for themselves.’ Someone shouldn’t decide collectively for us,” she says.

Jolly-Nagel and a few others quickly formed an ad hoc renewal committee, including fellow farmer Paul Orsack. In rapid succession, she became a director and president at the group’s next AGM that December. That year the conference theme was It’s Up To Us, fitting for the newly charted direction and youth within the organization. The Wheat Growers were willing to invest in the steadfast 25-year-old policy rookie. And even though she was as green as July barley in the ag policy world, she did have some policy background.

“As a kid I have memories of dad screaming and yelling in his home office, that’s what I thought policy was,” she says with a laugh. “He would get so passionate about topics. I see now that I have inherited that part of his personality, I get quite passionate talking on the phone.”

Jolly-Nagel has found a home within the Wheat Growers where she sees Canadian and provincial laws governing agriculture fluid and not concrete.

“If you don’t like the rules, there are ways you can change and influence the rules,” says Jolly-Nagel, who has her corporate director’s designation from the Rotman School of Management in Toronto, Ont., and the Levene Graduate School of Business in Regina, Sask. “You can have a say in that. The Wheat Growers, for me, was an organization that reflected my views and a way to influence those.”

Jolly-Nagel is grateful the group that “let her make mistakes on behalf of the organization” and labels former executive director Blair Rutter her “lighthouse” during her five years as president.

As she transitioned out of the president’s role in 2009, a mutual acquaintance Adele Buettner was forming up the forerunner of Farm and Food Care Saskatchewan, an organization dedicated to telling the positive stories of farming and empowering the agricultural community to talk with anybody about the industry in a straightforward, positive light.

Interest rapidly grew in the training sessions and Jolly-Nagel and Buettner quickly expanded as association groups showed an interest in honing such skills. She also thinks it’s necessary for farmers to show pride in their industry to inspire a new generation.

“That sense of pride has led to much better, in-depth conversations with consumers,” she says. “We don’t shrug our shoulders. The consumers in Canada are supportive in general of farmers, they want to know more. They want to know what we are doing. Now we have people actively engaged in this industry.”

Unlike many in agriculture who shy away from questions about crop spraying, GMO technology or any other raft of regulatory issues, Jolly-Nagel embraces it wholeheartedly as she believes it to be the only way the conversation will advance in a positive direction. To date, she has hosted more than 500 meetings with groups big and small and spoken to more than 20,000 people about agricultural issues. As one might imagine, she has slowly but surely crafted her presentations with confidence and openness.

“Before I was defensive,” she admits. “Now that I have been doing it for 15 years, I welcome it. What are your questions? We have good answers. I welcome the questions anytime. Give me any stage, I will explain what I do, and own the mistakes we made. I’m not afraid of it at all. I understand the defence mechanism, the anger about what’s being said. I fully get it, but it’s just not effective to be angry.”

Being such a positive force in Canadian agriculture led to a unique opportunity for Jolly-Nagel to take her skills worldwide as an international director with the Global Farmer Network in 2018, 10 years after becoming a member. The international organization of farmer speakers promote sustainable agricultural practices, economic growth and food security around the world, knowing that a collective effort is far superior to a series of individualist pursuits.

“It’s been one of the most impactful organizations I’ve ever been apart of,” she says. And while Jolly-Nagel is off promoting agriculture, having camera crews film on their property or simply engaging with people at the grocery store, she is forever indebted to her family for all the opportunity.

“I have a strong team at home,” she says. “It takes all kinds of skills to operate a farm these days. My skills are in communication and I’m grateful for my family’s support. They believe our licence to farm depends on it as much as I do.” 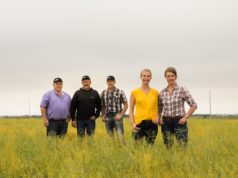 Auctioning from your Easy Chair