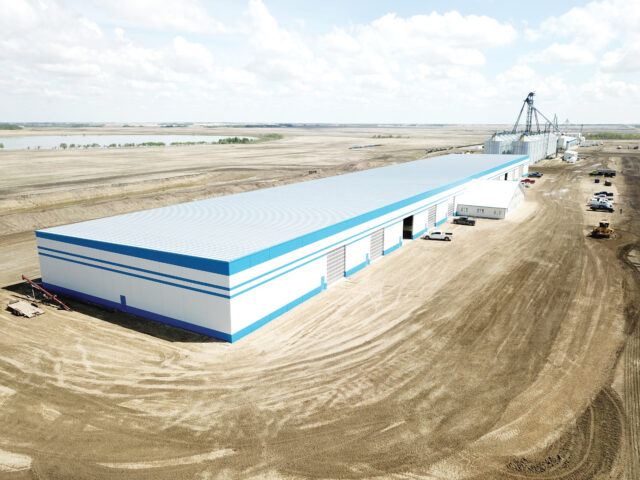 Farming on the Prairies can be a small world. But production and equipment continue to grow bigger than ever. While the natural question is how big of a storage unit does a farm need for said equipment, the answers are often found in the simple act of talking over coffee.

Craig Haan, director at Eagle Builders in Blackfalds, Alta., puts planning for future growth into perspective by first looking back. “Farmers should think about the equipment they used 20 years ago and compare it to the size they use today,” he says. “Twenty years ago, we already thought ‘there’s no way we can get any bigger.’ Here we are today.”

To envision the required size for a new equipment storage facility, fast forward that growth to 20 years from now.

This year, the company said half its business is from farmers seeking bigger buildings.

To the east, in Notre Dame de Lourdes, Man., Don Vigier, owner of Nodaco Building Solutions, says a 40-foot by 60-foot shop that was 16 feet high used to be considered large. Today, most of his customers are building a minimum of 60- to 80-feet wide by 100- to 200-feet wide. And it’s still not big enough.

“Nobody’s ever said a build is big enough at the end of the day,” he says. “I suggest they look at look at all their equipment, even place it all together in the yard and visualize how much space they will need.”

Can a building ever be big enough?

He says the size required for equipment storage depends on the size and unique needs of any given farm. “My other building, at 100 by 400 feet, was too short for a Super B truck and trailer. There wasn’t enough room around the ends,” he says. “That’s why this one is 120-feet wide. And I went with the 700-foot length because I don’t want to build another one.”

The new shop is used for equipment storage and maintenance as well as an office. Although Kroetsch’s last one was a steel build, this time he went with pre=cast concrete. “I liked the cement one better. It’s fast and low maintenance,” he says. “Although for some people, the steel is easier to do things with inside.”

Eagle Builders started construction on the new shop in early November of 2017, finishing by the end of March in 2018. “They stood the walls up and covered it in within about 10 days,” recalls Kroetsch. “That was amazing. A lot people in the area were watching.”

Beyond the build itself, there are considerations best worked out ahead of time. First, location. “I have a big bin system here, so it had to be close to that,” says Kroetsch. “You also have to plan around

He adds that services like electrical can take up to three months.

Asked if there’s anything he would do differently, Kroetsch laughs and says, “There’s always stuff you’d do differently. I would’ve built it four feet higher. It’s not quite as high as I’d like it to be.”

Because he’d already built a large shop, Kroetsch knew what he needed. For farmers who are thinking about what they might need, he suggests driving around looking at the many new buildings around these days. “You can pick up a lot of tips from different farms,” he says. “I went and looked a few Hutterite buildings. They’d built the same kind of buildings and you get tips from them on what you should and shouldn’t do.”

Haan says Kroetsch’s incorporation of lessons from his previous build into the new one worked out well. “It is a very impressive building. Every time I go to Saskatchewan and drive by it, it’s pretty neat,” he says.

While Kroetsch and Eagle Builders had a smooth successful build process, Haan says he’s unfortunately seen farmers have a harder time. While not necessarily intentional on the builder’s part, it can be as simple as the builder lacking the experience to support and guide the farmer through the proper planning process. In this case, surprises arise and that almost always means more money and time.

Outside of the building’s actual construction, there are associated expenses farmers should remember.

First of all, services. Whether it’s gas, electrical or plumbing, most builds require services be planned ahead. In addition to the financial expense, lining up tradespeople and inspectors can cost valuable time.

“We’ll come out, sit down, have a cup of coffee and go through the plan,” says Haan. “Pre-cast forces us to think about every step before we do it. We’ve even pre-determined where the gas meter will go before we start building. We know exactly how many lineal metres of gas line we need.”

Second, get real numbers. “Farmers should look to get specific and detailed quotations back. This removes much of the risk,” says Haan. “A lot of people in the ag sector come with eight by 11 sheet of paper quoting, ‘a 100-foot by 120-foot shop, $1 million dollars, wood frame, tin clad, electrical and plumbing included.’ That sounds pretty good to the farmer at first. By the time they’re done, it might be $1.5 million.”

Then there’s the location. Vigier says landscaping should be considered in the planning process. “There can be great costs in getting your pad placed properly, ensuring proper water drainage, and these types of things,” he cautions.

Haan agrees. When he visits a farm client, he looks for natural drainage, which direction the building should face, where it’s best suited for the yard and the concrete needs. “We set the height of the pad based on the relative ground around the area and we do full detailed site plans,” he says.

He adds that using technology such as Google Earth, builders and farmers can print a site plan using the largest on-site building to scale a site plan that gives the bird’s eye view, including access and truck turning radius.

Regulatory requirements may also come into play. “Farmers can often be surprised by some of these steps, so I try to guide them ahead of time,” Vigier says. “Here in Manitoba we have the Manitoba Farm Building Codes.

“Anything under 6,458 square feet can be dealt with through local jurisdiction,” he continues. “Anything larger, must go through the fire commissioner’s office with extra costs in engineered drawings and permit fees.”

Future growth, inevitable on successful farms, must also be considered. “Ninety-five per cent of clients say, ‘I should have spent the money to go bigger before,’” says Vigier. “Adding on is just not cost effective.”

This includes the logistics of the building as the farm adds new and larger equipment which needs to fit through the doors.

Finally, it all comes back to asking questions.

“Go take a look at past projects [the builder] has done. Talk to their past clients and ask if the builder hit their quoted price,” Haan says. “When farmers are planning for that bigger equipment, they can go to farmers of a similar sized operation, ask what they would do different, and have a cup of coffee. Just be farmers.”