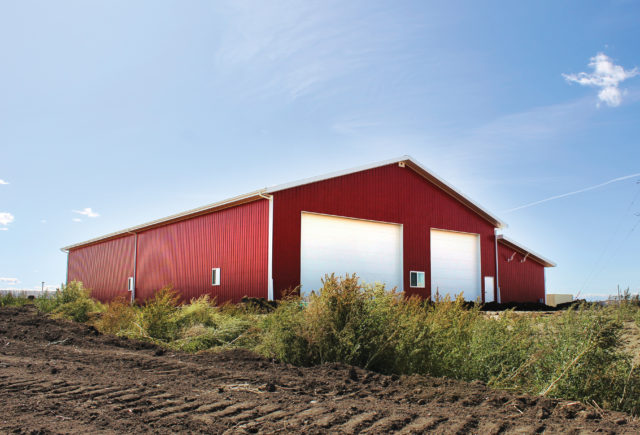 Farm equipment today comes with hefty price tags. When Old Man Winter blows in with force across the Prairies, rather than leave their investments out in the cold, farmers are storing them under one roof with more convenience than ever. When talking money matters, a little planning and preparation to meet budgets and timelines can go a long way.

Third-generation feedlot owners Ronnie and Karla Ostrom run Lonestar Cattle Company near Carseland, Alta. With a cattle capacity of 6,500 and growing their own silage, many of their considerations were made in light of the fact that they have many pieces of equipment that need to be stored indoors due to brutal winters.

“We have a lot of vehicles we use every day at the feedlot,” says Ronnie. “Feed trucks, loaders, tractors and such. We need heated storage so the vehicles can start up easily all through the winter. Our shop is getting old. It’s small and we needed something bigger.”

The Ostroms began planning and negotiating construction for their storage building last October. To hold all their equipment, it measures 120 feet by 60 feet by 18 feet and has in-floor heating in its concrete. There is also a 20-foot lean-to off one side for their new lunchroom, washrooms and mechanical rooms.

Satisfied with a quote from Remuda Builders and a February 2019 start date, the Ostroms were on board. “They were actually able to start at the beginning of January, and our weather was extremely mild until February,” says Ostrom. “It’s a post-frame building so they had to drill holes for the posts, and we were lucky there was no frost.”

The building’s shell was completed in three weeks, but then February hit hard with a deep month-long cold spell, so Remuda’s crew had to shut down for about three weeks before they could wrap up.

Building Lonestar’s new storage facility was a big project with many moving parts. The time factor was expected and they were prepared for the delays that did end up becoming a reality.

“In our experience with this and other projects involving contractors and tradespeople, it always takes longer than you think so be prepared for that,” says Ostrom. “If you have a deadline for when you really need to be able to use the building, give yourself lots of time.”

He cautions the best tradespeople are the busy ones. “We had to wait on our concrete company to pour the floor, but it was worth it because they did a really good job and they were the guys I wanted,” he says, adding they had to wait for the rain to stop long enough, which pushed them into July, to begin work on the heated concrete floor. “And then all the plumbing and equipment that goes with the in-floor heating was only completed in early September.”

Then there’s service prospects. They knew they were going to require gas and power to the building, which again had a long lead time. Power was hooked up in September, despite work beginning on it in March.

“You have to do an application for any new services and my advice would be to get started on that early because it can take a while,” he says.

Ostrom insists on securing a fair deal with all costs on paper to avoid surprises. “Shop around, get your quotes, but make sure everything is spelled out,” he says. “We made a few changes along the way, and every time it was documented and quoted. In the end there were no disputes and we paid exactly what the quote was.”

If you can, go bigger

“We are a Polled Hereford operation established in the 1960s,” says Wayne. “We’ve raised and showed Polled Herefords over all those years. Recently, we leased them out to another breeder, so we now just have a small herd of Simmental cows here.”

In 1981, Wayne and Linda purchased a quarter section of land next to the original homestead established in 1904. The couple planted trees for their yard and seeded the rest of the land to hay. “On the old yard, we have several small buildings we’ve been using for garages for our tractors and equipment, but we needed something in our yard where we could put everything into one building,” says Spence.

“We installed a 14-foot tall overhead door to allow for the larger tractor to be easily driven in and out, even if there’s a buildup of snow in the winter,” says Wayne. “It’s mainly yard tractors and our bigger tractor with the fork for feeding. It keeps our equipment out of the elements, and we wanted to make sure it was high enough to drive an RV into.”

Because the structure is a pole building with no plans for insulation or a cement floor, the Spence’s build was much quicker than the Ostroms’. The couple had actually received a quote from Warman two years ago, but some family health issues put off the project.

“We went back this summer and revisited that original plan, but made it a bit bigger this time,” says Wayne. “We were there on a Wednesday and by Friday, we’d picked everything out down to the colours and applied the down payment.”

Materials were delivered on a Wednesday and the crew completed construction by 5 p.m. in one day. Steel-Craft installed an overhead door the following week and aside from electrical wiring, the project was complete.

“Our family couldn’t believe how fast that building went up,” says Wayne.

Just because their build was quick, doesn’t mean there wasn’t lots of pre-work required. In order to save money, the couple went to work before their builder began.

“Linda and I did all the prep work ourselves to put the storage shed in our yard,” says Wayne. “We removed a tree row to make room, leveled off the ground and moved a small building that was in the way.”

They had many considerations in mind, and the couple ultimately took their builder’s advice to go larger than the initial plan. “They need a certain amount of room on each side for the Bobcat to go up and down and for installation,” says Wayne. “We thought we were limited to a smaller width, but they encouraged us to go back, remeasure and send pictures so we could go that little bit wider. That worked out really well. Everyone says the same thing: if you think you need a certain size, go that much bigger.”

The Spences also had an easier time with utilities in Saskatchewan than the Ostroms experienced in Alberta. “We had to coordinate with SaskPower and SaskTel to check out the lines, see where they were supposed to go and avoid any problems when Warman’s crew was digging in for the posts,” says Spence. “We called 411 and the representative was here within eight days”

Big fans of using local talent, the Spences had the 12 yards of gravel needed for post tamping hauled in by a nearby business. A neighbouring electrician who also farms did the wiring. This meant a slight delay during harvest before he could install the wiring, but this was planned ahead.

Finally, Linda’s selected colours and made sure the building would look good in the yard since they’ll be looking at it for many years to come, which leads to Wayne’s most important tip: “Never discount your wife’s input.”