Home Environmental Sustainability Build It, They Will Come 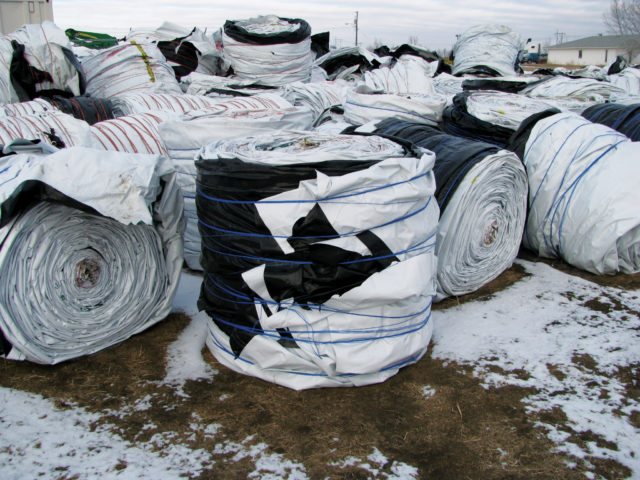 As stewards of the land, western Canadian farmers want clean and safe plastic disposal alternatives as much as anyone. While more disposal facility access and program promotion are needed, non-profit organizations, government programs, ag stakeholders and community volunteers are working to improve sustainable options.

“When it comes to stewardship of the land and materials, everybody wants to do the right thing,” says Tammy Shields, western region program coordinator with Cleanfarms. “It’s just a matter of building something so they can participate.”

The pesticide and drug container return program currently has a 67 per cent recovery rate nationwide. Jugs are triple rinsed, bagged and returned to retailers in Saskatchewan, and municipal collection sites in Alberta and Manitoba.

The unwanted pesticides program offers a three-year collection rotation across the Prairies.

This fall it will cover northern Alberta and Manitoba. “Producers can take advantage of returning unwanted chemicals for free,” says Shields. “There are about 20 sites per region across an entire week where producers can participate.”

There is also a grain bag recycling program.

In 2018, 1,257 tonnes of grain bags were collected in Saskatchewan alone. The provincial program is the only regulated one in Canada. With that, a non-refundable environmental handling fee came into effect last November to cover the cost of collecting and transporting grain bags to end markets to be recycled into new products.

Currently, there are 33 sites across Saskatchewan with the goal of adding two more by 2020, according to Shields.

Christina Seidel, executive director with the Recycling Council of Alberta (RCA), says participation depends on where you farm.

“For grain bags, there is access in southern Alberta through a recycling facility near Hussar. There are a few locations that will take baler twine at a recycling depot or transfer station, bale it and ship it to Minnesota for recycling. We really don’t have options for anything else yet.”

The RCA has been working on the ag plastics issue with other groups including the Alberta Plastics Recycling Association (APRA) for 15 years. “It’s an issue we know is important to farmers, and we know it’s important to rural constituents,” says Seidel. “So, we’re thrilled to have a provincewide pilot program launching.”

The Agricultural Plastics Recycling Group’s (APRG) pilot program to recycle grain bags and twine is expected to begin this fall. With $1 million in provincial funding, Seidel says the government’s sponsorship is great news.

“We’re thrilled they’ve stepped up and recognized this as an issue that needs to be handled. The fact that this is a government-sponsored pilot, to us, is really exciting because it can create the foundation for a longer-term program,” she says.

While the pilot will only address grain bags and twine at this point, APRG will look at potential options for other materials.

Seidel cautions there will be a limited number of collection points during the pilot project and encourages patience among farmers.

Starting out with pilot projects, as has been done in Saskatchewan and Manitoba, allows for the many associated challenges to be well assessed.

For one, each type of plastic is considered a commodity at the recycling phase and Shields likened mixing plastics prior to recycling, to mixing wheat and flax and dropping it off at a seed company to be sorted.

“Each type of ag plastic has to go somewhere else in North America to get recycled. Contamination – mixing bale wrap with net wrap, twine, grain bags – creates issues at recycling facilities because they’re trying to deal with one commodity. From farm to recycler, we have to worry about how that commodity is managed. This is probably my number one challenge across the Prairies,” says Shields.

Ambrely Ralph, with her husband Garett and his family, grows 2,200 acres of grains, oilseeds and forages near Arborfield, Sask.

The mid-30s couple both have off-farm ag retail experience, giving them a fresh perspective around handling ag plastics on the farm.

“We’re very familiar with Cleanfarms’ grain bag program through our work and have worked hard to promote it to our customers. This has resonated on our own farm,” says Ralph. “We’re lucky to have access to ag retailers close by who participate in the program.”

Ralph says one of the biggest challenges for farmers is that they tend to work in crunch seasons.

“When we’re in the midst of a busy season, there are more products being used, and a lot of packaging that comes with all the chemicals being used on the farm. It’s a lot of plastic,” she says. “It’s a struggle trying to keep things clean; the bulk and mess of it can be awkward.”

She wants to see ag retailers, equipment dealers and those selling bags to provide recycling information to farmers, not just groups such as Cleanfarms.

In Alberta, Assar Grinde has also been passionate about finding better solutions.

As a delegate with the Alberta Beef Producers, he motioned a couple of years ago to investigate recycling options and researched background for the board. In part, it helped form the eventual pilot.

Grinde runs a 1,300-acre commercial cow-calf and backgrounding operation in Ponoka County. As a livestock producer, his plastic use includes silage pit plastic, baler twine and net wrap, all difficult to reduce due to lack of sufficient alternatives.

“In the cattle business, plastic is imperative for the storage and transport of feed, preventing spoilage and maintaining feed quality,” says Grinde. “The big issue is that disposal is a problem; it doesn’t really break down and burning plastics outside of incinerators is not safe for human health.”

Currently, Grinde takes what he can to his regional landfill in miniature totes where it is buried in a special area. As for the rest of his plastics, he’s stockpiling them for now.

He says Lacombe, Red Deer and Ponoka counties just agreed to begin a grain bag recycling program, but nothing for other ag plastics.

“Access to a program that will take the material is the biggest impediment, and with that, the distance to collection sites needs to be reasonable,” says Grinde.

He adds farmer education is a must. “It is hard to get us producers to change our ways. So, having a simple process, communicated clearly, will be important.”

As farmers dealing directly with substantial plastic waste, Grinde and Ralph have ideas around solutions.

Grinde would like to see more domestic recycling capacity. “Shipping it overseas is always a bit tenuous, as we have seen recently. Perhaps certainty of supply will help entrepreneurs in this,” he says.

Ralph suggests more advocacy towards manufacturers on being conscious of their own packaging at the front end. “Maybe there’s a way to reuse recyclable materials even before they become something to recycle,” she says. “Also, more concentration in products means you don’t have to use more jugs per acreage. It’s practical and sustainable.”

Farmers can also find ways to keep recycling simple. It can be as easy as having empty jug bags ready for collection, making storage easier or sharing items within the community.

For Ralph, she’s glad to see ag recycling starting to move into the mainstream.

“We hate seeing waste and garbage in our communities,” she says. “We live here, we farm here, we’re growing the land. To come across empty cases and jugs blown off someone’s truck is frustrating, but it’s a reality. We’re doing as much as we can to take care of our own, to promote it and encourage others.”