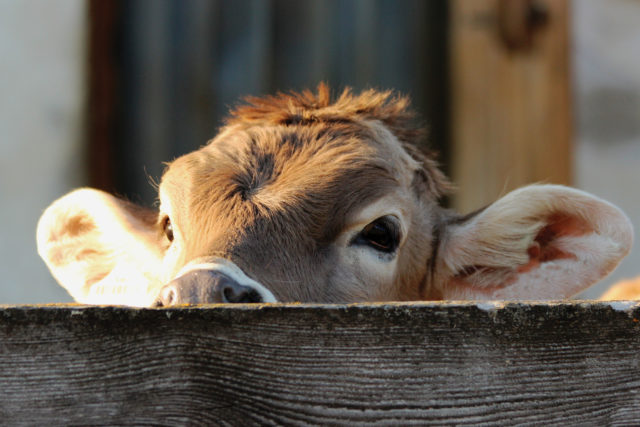 It’s easy to see why weaning is stressful on calves: sudden deprivation of milk and social contact with mothers, being handled for vaccinations, changes to feed and water sources, and transportation to a different environment with unfamiliar pen mates is a lot for young animals to cope with. The stress calves experience through weaning depresses their immune systems, making freshly weaned calves the most susceptible to bovine respiratory disease (BRD) infections. Stressed calves also have lower feed intakes. Listening to their bawling, seeing them pace in their pens and dealing with sick calves is also stressful for producers.

Minimizing stress during weaning is not only more profitable in the long run for cattle producers, it is also attractive to consumers. Consumers are increasingly concerned about the welfare of livestock and the use of antimicrobials. Low-stress weaning techniques are key to good welfare and disease prevention in freshly-weaned calves, thereby reducing the need for antibiotic treatments.

The Code of Practice for the Care and Handling of Beef Cattle recommends developing a weaning strategy that minimizes stress, such as two-stage, or fence-line, weaning. These practical weaning methods closely imitate the natural weaning process where a cow rejects a calf’s attempts to nurse.

Fence-line weaning is a lower labour method to reduce weaning. With this method, cows and calves are separated by a fence but can still see, hear, and smell one another, and preferably also have nose-to-nose contact. Dr. Haley’s research found that calves that were fence-line weaned vocalized 50 per cent less, walked less, and had higher weight gains in the first 10 weeks after separation than abruptly weaned calves.

There are multiple ways to set up a fence-line weaning program depending on a producer’s existing facilities. Regardless of the details, cows and calves should be kept apart for at least three to four days and fencing must be sturdy.

Dr. Haley’s findings are echoed by a study from Ohio State University that compared confinement weaning (calves separated from cows and put in a drylot pen) and fence-line weaning on pasture. Steers from the drylot weaning strategy lost 1.32 lbs/day the first week in the feedlot, whereas steers from the pasture weaning treatment gained 0.88 lbs/day. Only 15 per cent of the pasture weaned calves required treatment for respiratory disease, but nearly 40 per cent of the calves weaned in the drylot were treated.

Low-stress management is relevant to more than just those who retain ownership of feeder calves. For producers who sell direct to backgrounders or feedlots, or through auction to repeat buyers, practicing low-stress techniques can help build a reputation for healthy, high-performing calves worth a premium.

The first Western Canadian Cow-Calf Survey (WCCCS I, 2014 calf crop) demonstrated that 70 per cent of respondents used the traditional method of weaning—abrupt separation of the cows and calves. Twenty-eight per cent were using low-stress methods with 22 per cent of those utilizing fence-line weaning and 6 per cent performing two-stage weaning. The WCCCS II (2017 calf crop) saw traditional abrupt separation fall to 48 per cent of respondents, and saw a rise in both fence-line weaning and two-stage weaning to 34 per cent and 12 per cent, respectively.

The main reason provided for traditional separation was that respondents sold calves at or very soon after weaning. Other reasons included seeing no financial benefit (related to selling at auction directly after weaning) or lack of time, labour and facilities, which are valid considerations.

Try to avoid layering stressful procedures at weaning, such as castration and dehorning.

Practice low-stress handling methods, including while loading and unloading for transport (a high-risk time for injury). Gradually, transition calves onto new feed to avoid reduced intakes and potential acidosis.

Many areas of the Prairies have been or are currently quite dry. Forage shortages may require management changes, such as early weaning or creep-feeding the calves to take some of the pressure off the cows so they can maintain body condition. If grain, silage, or byproduct feeds are cheap enough, supplementing on pasture or even drylotting the cows can buy time for the pasture to rest, recover, and bounce back if the rain starts to fall.