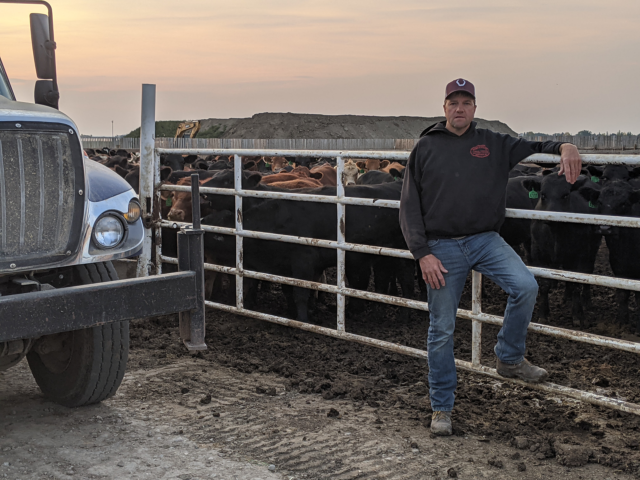 The drought has had an impact on Alberta’s feedlot industry and the rations feedlot owners will be feeding to cattle this fall and winter.

The feeding industry will likely run into additional challenges due to the drought, because more cattle are being dispersed, and there will be fewer calves available in the future. But currently, feed is the biggest issue.

“Barley production in Western Canada is down drastically from a year ago,” says Jacob Bueckert of Driland Freeders in Warner, Alta. Due to poor crop as a result of the drought and heat stress, wheat and barley prices in Western Canada have soared. To compensate, the feeding industry is importing lots of corn from the United States.

“Mostly what we’ve been able to do is buy U.S. corn and railroad it in from the Dakotas. We’re going to get U.S. corn coming in starting in November. Right now, we’re feeding barley and wheat,” says Bueckert.

But at the end of November, Driland Feeders will shift to corn and corn dried distillers grain (corn DDGs).

“A year ago, there were cheaper fuel prices and less demand for fuel, so ethanol production was down substantially,” says Bueckert.

Corn DDGs were quite pricy last year, but now they have come down quite substantially in price.

“It looks like we will continue to feed them at higher levels than last year throughout this winter. Between corn, and corn DDGs, we’ll be able to make up some of the downfall of barley.”

Driland Feeders is no stranger to feeding corn, and has done so at least three times over the last 10 years.

“When we start in November, we will have a certain percentage of our ration in corn all the way to July 2022. We were able to price it and lock in it, and have an idea of what that cost is going to be. We process it very similarly to barley or wheat, so that part doesn’t change a whole lot for us,” he says.

It’s not just southern Alberta, either. Feedlot owners as far north as Edmonton, Alta., are also sourcing corn as a feedstuff.

Feedlot owners are choosing to make that choice, because there isn’t the right volume of barley, and it is cost prohibitive to feed it right now. Wheat prices are also very high. At the time of writing, barley was regularly priced at more than $8.00/bu and wheat was also selling well above average.

“The implications for health are not going to be anything negative,” says Schreck.

The cow sector is a little different than the feedlot sector.

“In the cow sector, there will be more worries about high nitrate feeds, due to the drought and the adverse growing conditions we’ve seen,” he says. Some farmers have already tested their feed and found high levels of nitrates due to drought and climatic conditions that suppressed crop growth. Schreck says if animals have above-average nitrate levels there are risks of suffication caused by oxygen binding in blood, often evidenced by brown coloured blood. Nitrates can also cause abortions to occur in cows.

Schreck says feedlot owners may choose to feed corn, but it is still usually at a much smaller scale in northern and central Alberta.

“Folks that are closer to corn country and parts of Saskatchewan and Manitoba, they will be feeding corn when we are feeding barley rations in Alberta. But this year, just about everybody we work with or talk to is going to have some portion of corn,” he says.

There are a couple of key factors feedlot owners should think about when they are feeding corn, says Schreck. Corn contains less protein than wheat or barley.

“Cattle need additional protein supplementation when they are fed corn. There are some other things in terms of handling it that are a little different than barley. Corn tends to get beat up a little by the time it makes it this far north, so it has more fine particles in it. That’s not necessarily a bad thing because it comes somewhat processed already. It’s definitely not as clean a grain as barley. That’s just due to the length of the haul. It gets touched so many times by the time it gets up here.”

However, corn is still easier to feed than wheat.

“It’s actually a little bit safer, just because it doesn’t digest as quickly as other grains.”

Schreck says there will also be a lack of roughage available this year, as there are less silage supplies because of the drought.

This will limit the amount of backgrounding feedlots will be able to do, he says.

Ryan Kasko of Kasko Cattle Company in Coaldale, Alta., says he thinks feeders will be feeding more DDGs and corn this year.

One challenge is that many feed mills are not set up to process corn.

“Switching from barley to corn is a pretty easy transition, but whenever we switch our grain, we do it gradually. Cattle like to have consistency,” says Kasko.

He says it’s a good idea to consult with a nutritionist when making dietary changes in a feedlot.

Lyle Adams of 6A Cattle Company at Picture Butte, Alta., says that his biggest challenge right now is the logistics of getting the grain to his operation.

“That is the toughest thing my wife and I are having to deal with right now. We are switching to some corn for sure,” he says. “I don’t typically like to feed corn as I don’t think the cattle perform as well on corn as they do on barley. We are still going to keep some barley in the rations. Our hopes and our dreams are that with all the U.S. corn coming up here, I hope it puts enough pressure on the barley sector that the price will drop to where corn is coming up. I’m not sure that’s going to happen,” he says.

Adams worries about a rail strike or storm that could keep corn from coming up from the United States, as well. He said feeding corn makes sense financially and that’s the primary reason why he has chosen to do it this year.

“Between the nutrient levels between barley and corn, our cattle do better on barley for sure,” he says.

Similar to certain feed shortages, Adams is also concerned about the lack of labour in the industry.

“I don’t know where all the people have gone or went. In our operation, we’re feeding fewer cattle because we don’t have the labour. Labour is very, very short and I’m not sure what the answer is,” he says.

Rules of the Road