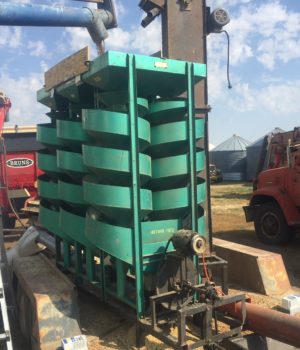 I believe in the potential of intercropping to generate higher revenue per acre, but there are many pitfalls and I stumbled into one this year.

In my opinion, if you’re going to grow two crops together, they should meet the following criteria.

Similar maturity: You don’t want one crop ready to combine and the other crop still too green. No use pairing flax with field peas. The peas might be mostly shelled out before the flax is ripe.

Complementary attributes: Perhaps one crop can help prevent disease spread in the other or perhaps one will keep the other more upright making harvest easier. I think you need to pick a dominate higher-value crop and then add a helper crop at a lower density.

Easily separable seeds: If the seeds are too close to the same size and shape, separating them can be a big problem.

This year, I grew an intercrop of maple peas and barley and I thought I had all the above boxes above checked off.

For weed control, I used Avadex for wild oats and a high rate of Heat in the spring to provide some suppression of brassica weeds. Post-emergent, Sencor controlled any additional brassica weeds. The intercrop half section was the cleanest field on the farm.

The maturity should have worked out, but the barley was planted using mid-row banders designed for fertilizer application. Without depth control, some of the barley was seeded into moisture and some was not. This wouldn’t have been a problem with a small rain following seeding, but the first rain didn’t come until June 1.

While some of the late maturing barley was on the green side, this didn’t end up being a big problem. Late rains caused regrowth in the maple peas so the field needed a Reglone application prior to harvest anyway.

The main reason for picking this combination was complementary attributes. Maple peas are a niche market and the Acer variety is preferred. However, a good crop of Acer maple peas can go flat before harvest making combining difficult. I hoped to help prevent lodging by having about 20 pounds per acre of barley included at seeding.

In the end, moisture was the limiting factor. The maple peas yielded about 15 bushels an acre with the barley at about six. I don’t think the barley hurt the maple pea yield much and combining was certainly easier with the mix.

While a total of 21 bushels an acre sucks, my kabuli chickpeas yielded only 23 or 24 bushels an acre and durum was similar. The only crop that exceeded expectations was brown mustard which hit 20. Just too darn dry and hot.

The problem came after harvest when it was time to separate the maple peas from the barley. I’d been cautioned that this might not be easy since the seeds are not dramatically different in size. However, I have an old Clipper cleaner and I thought there would have to be a screen combination to accomplish the task.

Not so. The best I could do with the cleaner left about eight per cent barley in the maple peas. The buyer said one-half of one per cent was the tolerance for the No. 2 specified in the contract. I surely wanted the contract price of $13 a bushel, so I looked for other cleaning solutions.

Luckily, I was able to rent/borrow a spiral cleaning setup from a neighbour. I had to do some modifications to make it work, but peas roll faster than barley and with that principle you can do a pretty good job of separation. However, the mixture has to be cleaned first so that it will flow through the spirals.

Needless to say, I spent a large number of hours figuring all this out and then running the crop through double cleaning. After separating the two, I re-cleaned much of the barley because it’s a new variety and I want it for seed in 2019.

Moral of the story – intercropping has potential, but the crop combination has to meet all the criteria. I may intercrop again, but it won’t be maple peas and barley.